You are here: Home / All Aboard! / Connor Stewart Hunter: A Model UN Delegate

It’s never convenient to introduce yourself with your real name at a model United Nations conference, as it either gets awkwardly forgotten, or confused with other delegates. I’m a debater, MUNer, a student of UBC – my name is Connor Stewart Hunter – and I’m happy to have the opportunity to write here on Roamancing. One of the best parts of travelling is meeting foreign people, but I especially find learning their political beliefs the most fascinating. To talk to French, German or Chinese travellers about their elections, economies and their beliefs about the future – or even better, to see them debate in action at a model UN conference. So I’d like tell a favourite model UN story of mine.

Model UN is the simulation of international relations where people who often travel across continents represent the country they are assigned on one of various committees. These can be the General Assembly, the Security Council, or more fanciful ones, like the Paris Peace Conference of 1919. Each committee has a set of topics to be solved with resolutions which are written by the delegates during the sessions, and voted on, with the goal of resolving all the topics. 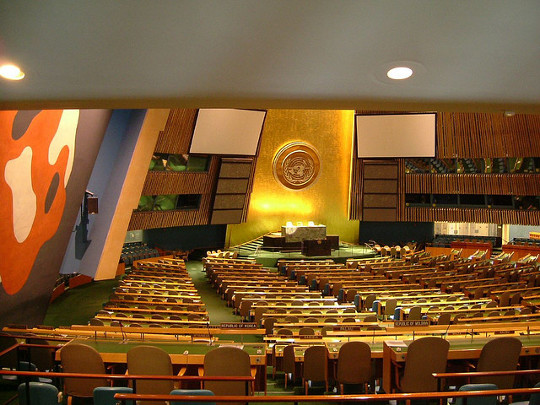 Not where I might be doing model UN, the actual GA is an interesting place. Photographed by Rob Young.

During my second model UN conference, in the World Trade Organization committee of some thirty delegates, myself representing Switzerland, I struggled to recover allies in the most difficult crisis I’ve experienced so far. At every model UN I’ve been to, I have arrived a lone delegate, making it imperative I create allies out of the cosmopolitan group of debaters and diplomats quickly.

My seat in this conference was conveniently beside the United States, France, and the United Kingdom – the western, pro-free market powers who I knew I’d have overlapping interests with. The delegate of the United States and myself noticed we were natural allies on transparency and regulation, and we developed a friendship, comfortable trading seats and using each others laptops, as we proudly argued our case together. 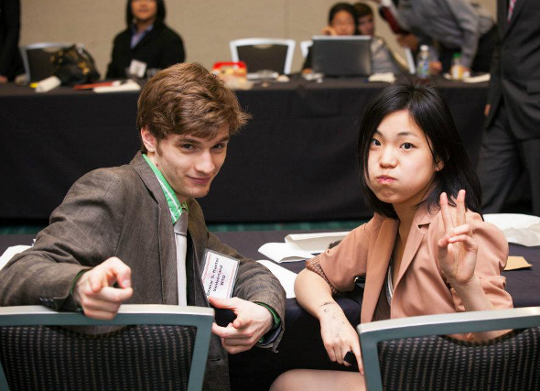 The US delegate and myself in the middle of serious discussion.

The discussion format is labyrinthine. Every person has a placard which they can raise to signal to the dais – the moderator of the committee – that they wish to speak. During regular session, a raised placard means you have a motion, during formal caucus, it means you wish to speak next; there are also informal caucuses, which are without rules to allow for quick discussion.

The topic the United States and myself worked so well together on, was the role of multinational corporations in international economic law and regulation. We had been developing a draft resolution, and the committee was fairly united on our goals, and then the crisis hit us.

The dais stopped discussion, and began explaining that a new, massive, multinational conglomeration named SkyBlock, had formed of the world’s largest companies, including Microsoft, Gazprom, Exxon-Mobil, among others.

This mega-corporation had used its massive capital resources to manipulate stock markets in Mexico, Indonesia, Egypt and Pakistan – each delegates at our conference – allowing the company to control enough of the markets of these economies to cause instability if it wished. SkyBlock was requesting it be given an official seat in the World Trade Organization. 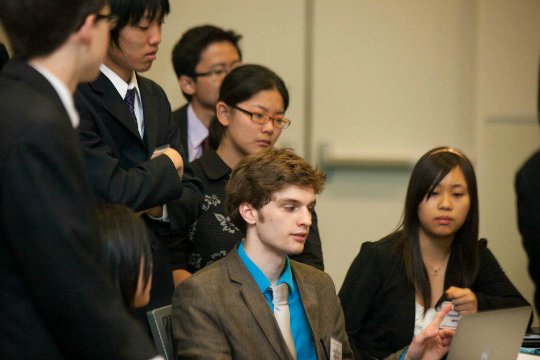 Working on a draft resolution.

Before I could turn to make sure the US delegate and I agreed, an official from the dais quietly took me aside for a private chat. The United States was shortly taken aside as well. Switzerland, the official explained, had laundered enormous amounts of SkyBlock money, immensely benefiting the Swiss economy, and I was to represent SkyBlock. Before I could talk to the US, debate began again and she stood up and declared her intention to muster every power the US could to stop SkyBlock, and reduce its power. We had been made enemies by our national interests.

We remained in a state of suspicion for the duration of that session, as I subtly tried to reintroduce the idea that the committee could work with SkyBlock. Slowly I acquired help across the floor, and a distinguishable pro-SkyBlock force emerged by the end of that session. About this point, the American delegate, a few other outspoken countries, and myself, all converged outside of formal debate, to compromise.

Some delegates backed SkyBlock, because they believed the multinational corporation could help their economies, others considered multinational representation in the WTO as the future of the organization. Eventually, our group negotiated a compromise resolution, in which SkyBlock was given representation in the WTO, but under the conditions of new international regulation. The alliance between myself and the US delegate was recovered, and a comprehensive resolution passed with the unanimous consent of this small group of delegates from across the world and Canada.

I’m a debater at the UBC Debate Society, I go to model UN conferences wherever I can, and I study at UBC.  Above all I write.