You are here: Home / All Aboard! / Discovering Carmina Burana at the Brott 2011 Music Festival

When you think of Hamilton, you typically think Steel City.  You don’t necessarily think of an area surrounded with beautiful parks, many talented artisans, delicious locally produced foods, and talented musicians, but that is indeed what Hamilton has to offer.  Especially the musicians. With all the music writing I do I don’t know how I could have missed all the music talent that is fostered in both Hamilton and Winnipeg – two places I have very much enjoyed exploring this summer.

Hamilton’s music scene has in fact helped rid me of a fear of stuffy stereotype I’ve harboured for the Symphony since my youth. Admittedly I was ready to give the Symphony another shot at a second date.  A good friend with Burnaby Culture had been dangling the Symphony in the Park before me for some time like a juicy apple for the picking.  Had I been in town that would have been my second date with the Symphony, but that like the Burnaby Blues and Roots Festival I missed (luckily Clippernolan caught it though – here’s his post). So when I was invited by the beautiful Ardyth Brott to the final performance of the Brott Music Festival for the 2011 Summer Season, I jumped at the opportunity.  I had after all met her husband earlier in the week, Boris Brott, for whom the festival is named, and who in addition to being a very dear man, I was told was an incredibly talented conductor.  Really, how could one turn down such an appealing invitation.

I certainly was not disappointed. 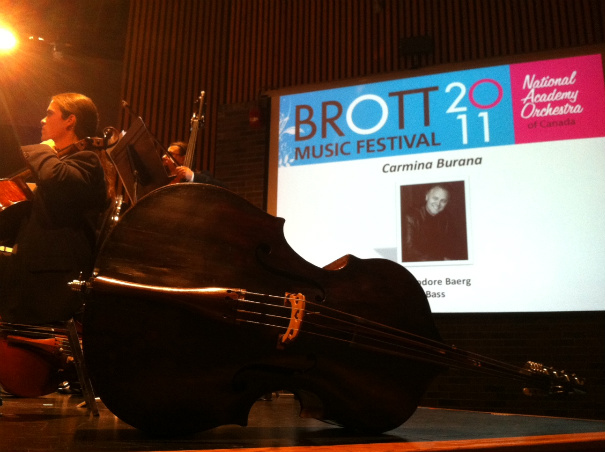 Upon arriving, I started joking to my friends at the tone set by the beautiful curves of the string instruments, matching the beautiful curves of my two dates. And that was before I heard their sweet, sweet song.  The music of the orchestra was absolutely intoxicating.  I never realized just how absolutely sensual and sexy a talented orchestra can be.  Talk about HOT Summer Nights.

And then there’s the conductor.  WOW!

The Brott Music Festival fosters a young conductor each season as the apprentice conductor to Maestro Brott.  This summers’ Apprentice Conductor was a rather scrumptiously handsome young man by the name of Philippe Menard.  Was adorable to watch him.  Like a puppy trying to fit into his oversized paws.  And tremendously sensual when he just used his hands.

Despite his adorableness, he had nothing on Boris Brott.  There is something about a man that carries himself with poise and confidence.  Watching him conduct would be musical even without the instruments. So beautiful!

The performance was Carmina Burana, which I discovered had some powerful songs, some of which made me giggle when the latin was translated.  Especially when one realizes that Tenor, John Mac Master was singing about being a cooked goose about to be pulled apart by gnarly hands and gnashing teeth.  Funny how even in the 13th Century, the central themes to poetry were booze and sex.

My favourite was the first act leading up to intermission, as the focus was on the orchestra, which produced such beautiful music.  I also rather enjoyed the voice and power of Tenor John Mac Master, who received a well deserved standing ovation at the end of Act 1.

Act 2 wasn’t as powerful to me, as I found there was too much going on that took away from the orchestra.  That said, I understand that Carmen Burana is an orchestral piece.

Perhaps this is an adventure for another day.