You are here: Home / All Aboard! / World Best Soaks: Inspired by Le Chamois Whistler and Scandinave Spa Whistler

It’s been an interesting year. One that has been presenting a lot of change, for the better I think.  You see both Brie and I got hit up in the Rat Race this Winter / Spring to a very unhealthy extent.  I don’t joke when I say that I think we were both heading to a nervous breakdown or a heart attack.

I think it was the idea of Roamancing that kept us hanging on by a thread to our sanity.  That idea of taking time for ourselves for an escape for a day or a full fledged holiday.  We have Whistler Tourism, Le Chamois Whistler, the Rocky Mountaineer and Scandinave Spa Whistler to thank for showing us the importance of slowing down for our sanity, creativity and our health. 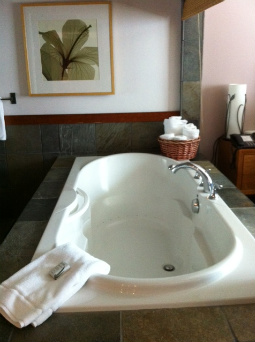 Really Le Chamois was the precursor with a weekend away in Whistler for the Telus World Ski and Snowboard Festival with Richard Yearwood.  No, not that sort of weekend.  Although I love Richard dearly and find him to be none too hard on the eyes, we are friends and colleagues, not lovers. Being the Easter Holiday and the last weekend that Whistler Mountain was open for skiing, not a room was to be had, until Le Chamois came to our rescue and provided a little inspiration for me for this column.  On a weekend that Richard and I were running all over the place, experiencing and covering this and that, Le Chamois provided us with a much needed piece of tranquility and bliss.  The piece de resistance being the tub!  Which I must say was sent from the heavens after I hobbled back to Le Chamois from my first ever snowboarding lesson (with the heavenly Sean Matthews).

For Brie the same tranquil escape and reminder of how desperately we both needed to slow down came a few weeks later, as the Rocky Mountaineer sent us on a day’s retreat to Whistler and the opportunity to visit the cell phone and speaking free oasis of the Scandinave Spa. 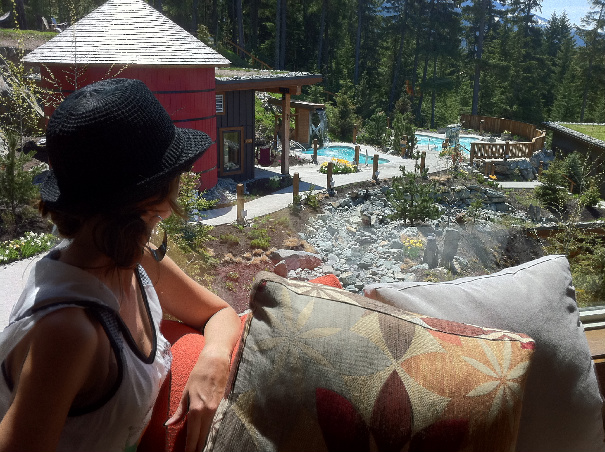 These escapes were the wake up calls we needed to take a look at our lives, remind ourselves of the importance of taking time to smell the lavender, enjoy time with friends and family, and relish in the little adventures in life, as at the end of the day it is those moments that are really important.

To this end, we plan to continually remind ourselves of this with this column honouring the World’s Best Soaks – whether in the form of a tub, a spa, or a natural hot spring.  To all of you, we raise a glass in thanks.