You are here: Home / All Aboard! / #CrossCanada Playlist ~ Ross Neilsen & the Suffering Bastards

One of the beauties of driving across the country is all the interesting people you meet along the way.  This was certainly the case of my solo drive this Autumn.  Seems to me that when you are on your own, you are almost more open to talking to other people and meeting strangers on the road, especially if you are like me and a terrible eavesdropper.

I was having one such moment when I pulled into the tiny Village of Rossport, looking in desperation for a non-fast food chain lunch spot, hypoglycemia rearing it’s ugly head, as it was 3 or 4 in the afternoon and I’d forgotten to eat again.  Happened upon a real unexpected find, in the weaving bends of Northern Ontario filled with small diners, fast food chains and truck stops.  The find?  A whimsical cafe that made me feel like I was on the Gulf Islands, with the work of artists decorating the garden path in the form of pottery, mosaics, and the odd sculpture.  Opening the front door, I took note of a poster for a band that was coming to rock the joint and was greeted by the work of local artists adorning the walls.  The place?  The Serendipity Garden Cafe. 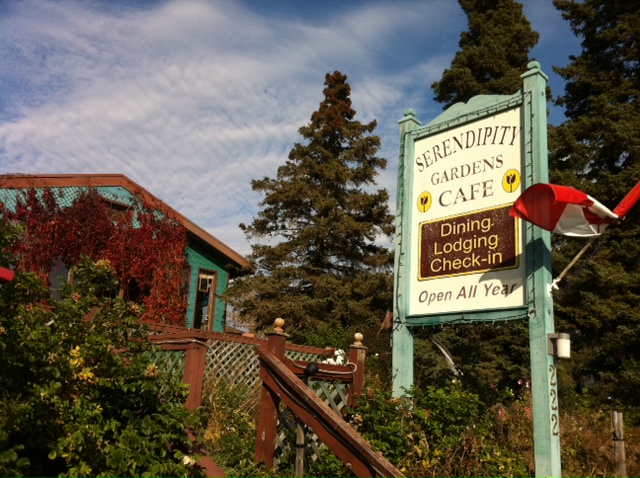 This was definitely a local hotspot for an evening out, when you wanted something a little classier than the local pub, accompanied by a nice sit down meal.  Walking in, you’d expect to find a few locals chatting over a leisurely lunch or coffee, just not at 3 or 4 in the afternoon, when most self respecting people were contemplating what to make for dinner. Instead I found the unexpected. Three dark and mysterious men with scruffy hair and unshaven faces, the kind that you knew were trouble in a very good way, and were out of place in this whimsical little cafe.  These were certainly not locals, but rather fellow travelers, like myself. I don’t know why, but I suspected they were musicians from the get go. I even wondered if they were the upcoming act at the Cafe.

So what’s a gal to do, sitting all alone at a table waiting for her meal, but eavesdrop on the conversation of three dark, mysterious and handsome strangers.  Clearly the one with the piercing dark and playful eyes was no dummy, as he started to tease me by repeating the dessert menu aloud and glancing mischieviously in my direction.  Smart, funny, with that rugged scruffy look of an artist, he had me enraptured.  Alas I learnt on-route to the washroom we were passersby in the late afternoon, heading in opposite directions. And no, this wasn’t from eavesdropping. Anyone who starts taunting me with sweets clearly needs to be talked to directly.

I was right.  They were musicians ~ Ross Neilsen & the Sufferin’ Bastards (Shawn Worden & Karl Gans) ~ and not only musicians, but Blues Men … mmm, mmm, mmm. The one with the piercingly handsome mischievous eyes being Ross. I may not have got to see them play live that night, as I had to keep driving South East, but they did give me their CD, which kept me wide awake and rocking along as I drove through the worst of moose country that night.  Not only did I enjoy the tunes, but they kept me safe and sound on the road. Thank you gentlemen!

Here are a few tunes & other sundries from Ross Neilson & the Sufferin’ Bastards:

Clearly these boys aren’t new to the road trip ….

They’ve even found a worse motel room to my Sault St. Marie motel room with the paper thin wall, and couple having raccoon screeching sex next door …

Feel free to join me in stalking them online on ~

Time to take us home boys …

Oh and before I forget, the Bastards are still on the road, catch them at: