You are here: Home / All Aboard! / Vancouver Theatre: Snowman on the Arts Club Revue Stage

After hearing so much about the process and ideas that went into Rumble Productions‘ Snowman, I finally saw Greg McArthur’s play at the Arts Club Revue Stage on Saturday night.

Watching Snowman really gave me a sense of what Craig Hall meant when he spoke about theatre that dissolved the fourth wall — that imaginary transparent wall that separates the audience from the stage. The characters in Snowman speak directly to the audience, while not hearing each other, enacting an isolation that makes the audience like each character’s close, personal confidante. The stories of each character are told with an honesty that is almost ruthless.

The play is remarkable in the way that it uses a small, stark set to represent so many places. It’s just a bed at the centre of the stage, that triples as a home, a glacier, a seedy motel room. I could not help but be moved by the vulnerable intimacy of the opening scene, which began with the characters sleepily just getting out of bed on a cold, arctic morning. 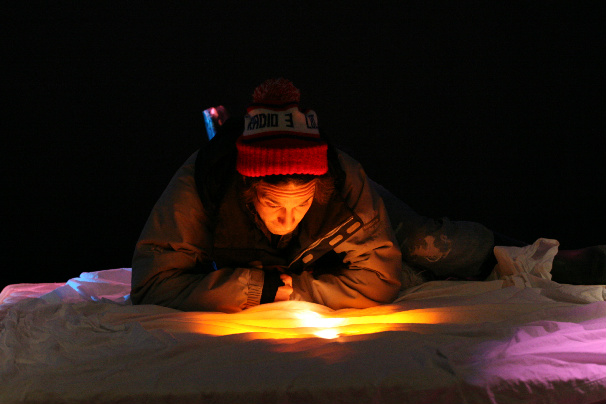 Watching the characters in turn speak to us so bluntly about their lives, in their pajamas, really made me feel like we were in their home, in their heads, witnessing their lives closely enough to feel them. There is more than just no fourth wall — there is no disguising or covering up of the characters most raw and intimate emotions. Even in conversation with my closest friends I censor this or that detail either for my sake or for theirs. But in Snowman the censorship and silence happens between the characters, while the audience is like the characters’ trusted diary. This is a play about the crushing alienation that sometimes happens between people that live closely, and how the disconnection left unacknowledged can make people feel dead, cut off from themselves, and desperate for a radical change to awaken them. 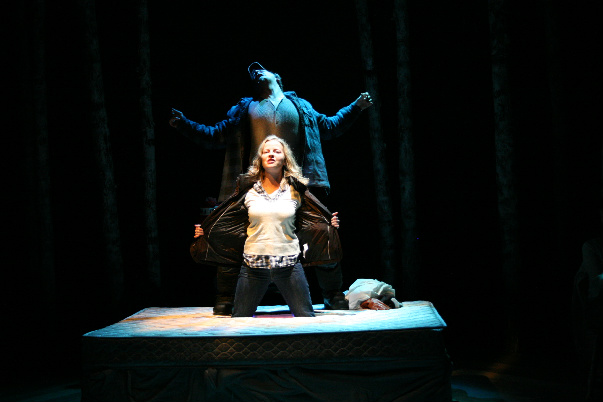 Derek Metz as Denver and Anna Cummer as Kim in Rumble Productions’ Snowman by Greg McArthur. Photo by Itai Erdai.

The effect of this closeness between audience and character for me is that it lowers my defenses in how I listen — I don’t see these characters as apart from myself, I am an insider — what they are experiencing is what I have or could experience. The things they say that would seem like Too Much Information on a sitcom are welcome details here, just part of our shared experience that is teaching me about what happens sometimes when people become alienated from themselves and from others. Or when people live as though they don’t have the needs for fulfillment, connection, care and intimacy that they do. “Pick a direction and let’s go” is how Denver and Marjorie’s lives were made — their tiredness, apathy and separation from themselves takes a toll that we see unfold in the play, in the form of a bizarre, surreal, sometimes even humorous story. The action shakes long-stagnant things up, in the characters and in the plot, and we watch the pieces fall where they may. 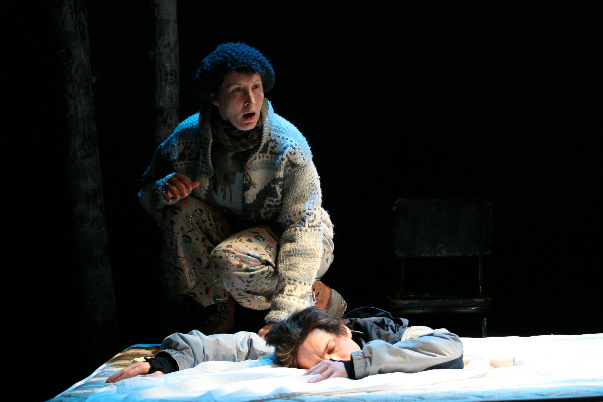 Kathleen Duborg as Marjorie and Charlie Gallant as Jude in Rumble Productions’ Snowman by Greg McArthur. Photo by Itai Erdai.

This is Rumble Productions‘ second production of Snowman, the first being eight years ago. I didn’t see the first production, but I can assume from the depth of this one that director Craig Hall found a world of meanings in this play that he felt called for revisiting Snowman. Thank you Craig for directing a wonderful and chilling production, and a big congratulations to the talented team that helped make it a success: set designer Yvan Morisette, music & sound designer Robert Perrault, lighting designer John Webber and stage manager Jaimie Tait.

You can see Snowman until November 19th on the Arts Club Revue Stage on Granville Island at 8 pm.