Had you been watching the Western News on the evening of December 17th, 2011, you’d assume things were looking pretty grim in Cairo, Egypt from images coming out of Tahrir Square, or so the tweets I received suggested.  Me?  Being on the ground in Cairo, I was completely oblivious to all, but the wonderful night air, half way around the World, in a land full of mystery, intrigue and history.  What was the night like for me in Cairo?  Completely surreal, in a very good way. 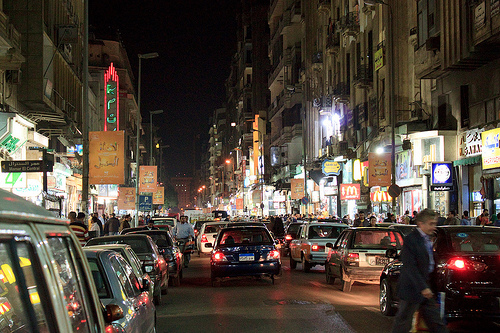 It all began with an initial venture out onto the street outside my hotel, looking for a friend.  I have to admit, I was somewhat nervous in a night, alone in a foreign land filled with the sounds of traffic and horns honking.  I felt a bit silly about that, as I’d been traveling the World from an early age and exploring places predominantly on my own. It’s just Cairo was so totally different from anywhere I’d been before and I wasn’t sure how the Arabic culture would take a Western woman wandering the streets alone at night. I had a scarf with me for my head if necessary, but wasn’t sure if that would just look strange, not knowing how to put it on properly. At first, I have to admit, I was a bit concerned of looking like a ‘woman of the night’, as I searched for my friend.  What that resulted in was taxi cabs constantly stopping and asking me if I wanted a lift.  After a minute or two, I realized I needed to walk with purpose and confidence. The cabbies stopped pulling over for me and the night and this foreign land opened up before me. It didn’t take long before I realized that despite the different sights or sounds, this was just a typical weekend night on the town in the big city. Other women walked alone with confidence, groups of friends went to the movies, lovers went on dates … I passed a cabbie stand, had them all ask me if I wanted a ride, I smiled and waved and said “No, thank you”, in my best Arabic. They smiled and laughed, at what I thought was my good nature, although in hindsight it may have been that I that I was mixing up the word ‘shukran’ for ‘thank you’ with ‘sakara’, which is my favourite Egyptian beer. Not a surprising slip up for me. A gentleman even called after me down the street thinking I’d dropped my phone.  Others shouted his message after me until I heard. Running on what I later came to know as ‘Egyptian time’, it took me an hour to find my friend, but I didn’t care, I was discovering a night full of welcoming smiles and people. 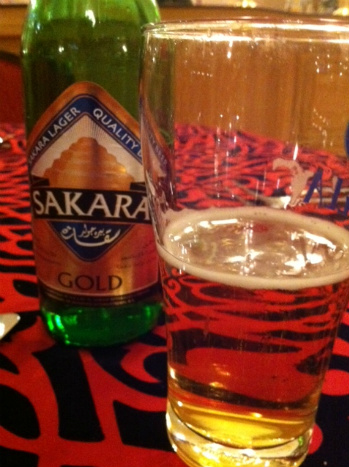 Shukran for my Sakara

I am not sure I should admit this, knowing that an evening alcoholic beverage is not a cultural norm in Egypt, but how did I spend this first night on the town in Cairo?  At a bar drinking alcoholic beverages with locals, after what had been a most exhilarating cab ride.  The phrase ‘we’re not in Kansis anymore Toto’ comes to mind when I think of the cab rides I experienced in Cairo.  The traffic and driving is insane on North American standards, but the drivers and especially the cabbies are amazing.  Where we’d have 20 accidents from that kind of driving in 4 city blocks, they have none.  My recommendation when in Cairo: don’t rent a car. Let someone else do the driving.

Shortly after being handed my first ‘sakara’ for the evening and being corrected on the difference between ‘sakara’ and ‘shukran’, I witnessed the most beautiful sight ~ an Egyptian wedding candelabra dance!

Love that this is done so publicly for all to enjoy and not just the wedding party and guests. So very beautiful!  And yes, in case you are wondering those are real, lit candles on the women’s heads.

How did I spend the rest of the evening?  Interviewing the gentlemen I was with on cultural differences between Egypt and Canada.  What did they think of a woman without a head scarf on? How did they feel about a woman drinking an alcoholic beverage?  Brazen I know, but I was interested in these things, and they seemed to enjoy the questions. Not sure if some of the responses weren’t watered down for me, but I was told in Egypt that it is a woman’s choice as to whether she wears a head scarf or not. The same went for the drinking, although that was more of a religious choice too.  And no, no head scarf did not imply that you were a woman of loose morals. They also pointed out that they were all friends, despite different religious affiliations. 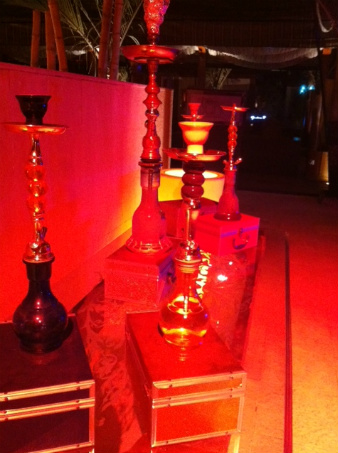 A tempting cultural experience, that sadly I missed.

I watched the drinks leaving the bar. 20 non-alcoholic drinks to every 1 alcoholic one. The blender was used a lot, fancy coffees were popular and there didn’t seem to be a difference in price between the alcoholic and non-alcoholic drinks.  Couldn’t help but think it would be a good place for a pregnant lady to enjoy a night out.  No one would complain about her ordering a non-alcoholic drink, drag their feet about delivering it and there’d be plenty of choice.

Enjoyed my last drink on the patio watching men enjoy a hookah.  Was tempted to try, but it was late and I had an early morning.  Was glad for that decision, as it meant I had a clear head when the first marriage proposal came and an attempt at a kiss. “Laa Shukran – Canadian gals do not have loose morals, even if they are drinking beer and not wearing a head scarf.”