My recent trip to South Africa was unlike any other trip I’ve ever been on. For me, travelling usually involves a lot of visits to cities and not a lot of encounters with animals. That all changed on my first few days in South Africa when I came up close and personal with both sharks and penguins (don’t worry, not at the same time).

Shark cage diving was probably the biggest incentive for my trip to South Africa, but as the morning of the dive grew closer, I felt more and more nervous. What on earth was I thinking? I was going swimming – with sharks? I was going to get into a submerged cage while a great white shark circled me like dinner? Was I crazy?! But it was too late to back out and besides, I knew I would regret it if I didn’t go. 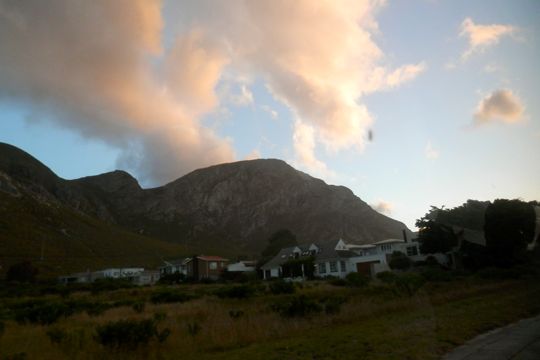 On the morning of the dive, we woke at 4:30am for a two hour drive from Cape Town to Gansbaai, a small town popular for shark cage diving. I was too nervous to sleep and watched the sun rise as we drove along. Upon arrival, we were given breakfast and a safety briefing, and then headed out into open water. We were told that since it was low season, once we dropped anchor it could take up to an hour of chumming for a shark to appear and that we might only see one or two sharks in total.

However, we had barely dropped anchor when a shark appeared! We hurried ourselves into wetsuits while the crew dropped the cage into the water. It hung off the side of the boat and fit six people comfortably. I opted not to be in the first group to go into the cage as I was still feeling nervous and wanted to see some others go in first. I clambered up to the top deck to get a good view. 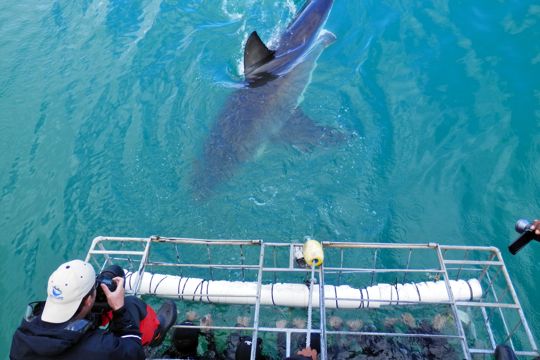 Watching from up top

Watching the first group, I could feel my nerves fading away. The crew pulled a tuna head on a line, luring the shark, and it was clear the shark was far more interested in the bait than the people. I had originally envisioned a giant shark ramming the cage face-on, but the shark just followed the bait instead. It did rock the cage at one point, but I could tell everyone was safe in the cage. By the time the first group was finished, I could hardly wait to get into the cage.

Lowering myself into the cage, I felt my breath catch at the cold water. We were still in the Atlantic, after all. I held onto the handlebar, my head above water, gently paddling my feet. It was quite nerve-wracking. From the top, I had been able to see the sharks coming, but now, with my head above the water, I had no idea if there were any underwater nearby. It was only when the crew yelled, “Down!”, we knew there was a shark close by. We pulled ourselves down, and I watched in amazement as a great white swam by. My only other experience with sharks had been on the other side of an aquarium tank and this was just something else. 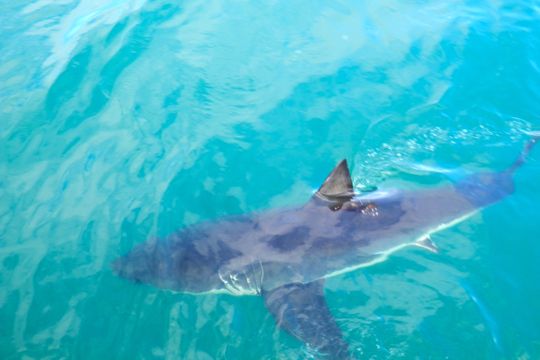 We continued to plunge ourselves into the water every time a shark swam by and gradually I felt calmer, though I remained on high alert the whole time. When we emerged from the cage, I was shaking from both the cold water and adrenaline. I had done it! I felt so exhilarated.

The first group hopped into the cage again, and this time one member of the group had the ultimate experience. While still on land, we had been given strict instructions not to stick our hands outside of the cage. “It doesn’t matter how much you want to touch a great white, I can guarantee you they move faster than you and you will lose a hand,” we were told. But with all hands still in the cage, one shark, when passing right up against the cage, flicked its tail into the cage and touched one hand.

By the end, we had seen ten different sharks including a few babies, with the largest shark being three and a half metres. Not bad for low season! 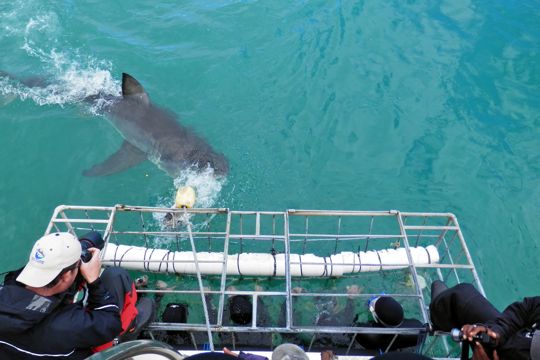 Stay tuned for more adventures roamancing the wildlife of South Africa … next up Swimming with Penguins!

Things To Do
Cape Town