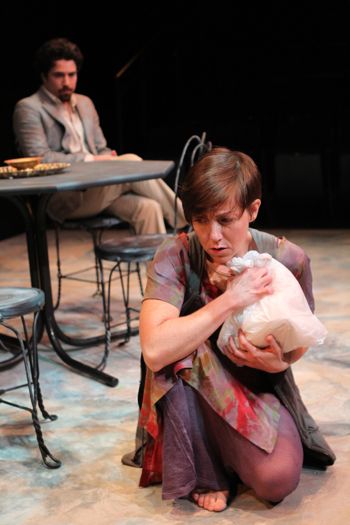 Some people travel to visit friends or family. Some people travel to see the world. And some travel to escape. Such is the case of Jane, a character in Pacific Theatre’s latest show, Mother Teresa is Dead.  Jane has travelled from England to India because she wants to help. She is overwhelmed by the poverty and injustice she sees in the world and feels an irrepressible need to help the less fortunate. But she has also left England to escape the life with her husband and young son that she sees as shallow and meaningless and seems to be drowning within.

When the play begins, Jane’s husband, Mark, has just arrived in India. Jane has been missing for seven weeks and Mark has only just tracked her down to the house of a British expat, Frances. Frances has kindly taken Jane in, but is unable to shed any light as to why Jane left Mark and their son without a word. When Mark learns that Jane has been working at a shelter helping children, he is livid that Jane would leave their child to help other children. There are explosive confrontations between husband and wife, as well as with Srinivas, the owner of the shelter who also arrives looking for Jane.

Mother Teresa is Dead made me think about travelling and why we travel. As someone who loves travelling and travels as much as possible, Mother Teresa is Dead made me think, why do we travel? Why do I travel? I know that I, as the traveller, learn so much. I learn about other countries and cultures. I try new things and have new experiences. I learn what I like and don’t like, and what I am capable of. I come home feeling enriched. But what about everyone else? How do my travels affect other people? It is clear Jane’s journey to India has affected so many lives, from her family in England, to locals like Srinivas and the children of the shelter, to the good Samaritan Frances. By travelling to India, does Jane really what she sought to do – help the less fortunate – or does she instead bring a world of trouble into Frances’ home?

Mother Teresa is Dead is a play that asks a lot big questions, but leaves them unanswered. Can one live a guilt-free life when so many people in the world are suffering? Do we do more harm than good when we try to help? Are charities designed just to ease the guilt of comfortable Westerners? In this way, Mother Teresa is Dead is neither preachy or apologetic; it just makes you think. As I was leaving the theatre I found I was asking my own big questions about travel and the motivations for travelling that I could not find the answers for.