You are here: Home / All Aboard! / Being In The Audience For A Television Show Taping In LA 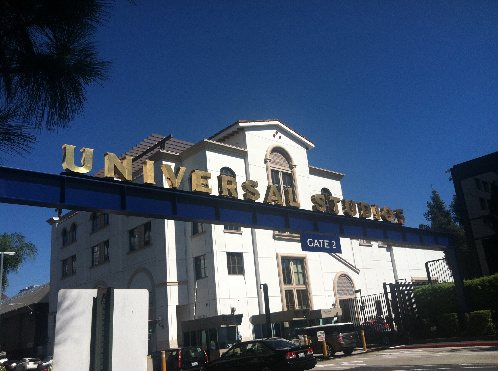 Having several friends and family members come out to stay with us in LA, means we have all the tourist and local attractions down! One of the biggest draws has been to attend a television show taping.  Having done this a few times now, I have realized there is a lot you need to know before going, that is not told to you when you set out to get audience access.  I have found some of this info in the small print of tickets, but really … who reads that?

The first thing you need to do is find a website that issues audience tickets for the show you would like to see.  On Camera Audiences is a great one with a lot of common shows, and Audiences Unlimited has several others.  For late night talk shows, such as Jimmy Kimmel, you must visit an independent site specific to that show.  You can get Jimmy Kimmel tickets here.  You can get Jay Leno tickets here. It is free to attend show tapings, but you must have a ticket.  The number 1 absolute important thing for you to know is…unless your ticket says ‘Priority’, you are not guaranteed a seat.  Each show holds a certain number of seats available for the actors families and a certain number of seats are specified for public audience members.  If you hold a Priority Pass, it will tell you what time you need to be there by. Seating still goes in order of arrival, so you want to be there no later than half an hour before that time.  Some people arrive an hour earlier.  Be prepared to stand in line for a while without anywhere to sit, because you will not necessarily get to go right in at the time provided. 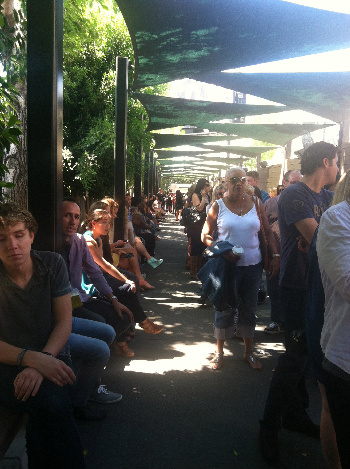 Waiting in line to see Chelsea Lately. (Nice of them to provide us with some shade!)

If you have a general ticket you must arrive a minimum of 2 hours before the time told to you on your ticket.  Upon arriving a number will be written on top of your ticket.  This lets you know where you are in the order of the line.  This is extremely important, because as the Studio Pages are told about available seats the actors have chosen not to use, you will be let in by the order of those numbers.  If you have a really high number, be prepared for the high possibility that you will not make it inside.  As a consolation if you don’t make it, the Studios automatically issue you a Priority Ticket to return to another taping. 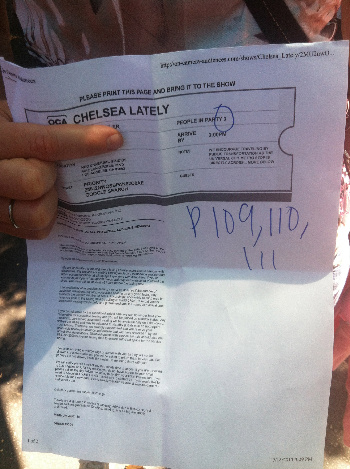 We had priority tickets and these numbers mean we were the 109th, 110th, and 111th people in the priority line.

If you are going with a few friends, once you have checked in, it is fine for one or two of you to stay and hold your spot, while the others walk around.  Bring food and snacks with you, but know that none of these will be permitted inside the Studio, so you’ll have to either finish or dump what you have left.  We got lucky a couple times and had a coffee truck drive up to sell us some fun drinks, but you may be in an area where there’s nothing available.  At some tapings we have been given water once inside and for a few longer tapings they have provided us with pizza half way through the show, but don’t count on that.

This brings me to the point of what you are allowed to bring inside for the taping.  The answer is basically … nothing!  You may bring your purse and wallet, but your cell phones and cameras will be taken from you upon going through a mini airport security screening device.  The networks don’t want any photos getting released of an episode before it has aired. You will probably also have to sign a confidentiality waiver and audience member agreement form. You also definitely don’t want to be the one who’s cell phone rings in the middle of taping, because you forgot to turn it off!  Don’t worry though, you’ll be given a claim ticket to get these back as soon as you leave. This is why I unfortunately don’t have any great photos for you of the actual sets.

During the actual taping of the show you can expect to have a great time! There’s usually an audience warm up guy that gets you in stitches, and I’ve even seen a few audience dance offs.  Once, we even had to practice our gasps, shocked expressions, loud applause, soft applause, cheering screams, ooos and ahhs.  You’ll come to understand why the live audience laughter you hear while watching TV at home, isn’t as ridiculous as you think it is.  It’s also fascinating to watch the filming process.  Sometimes, after filming a scene, there will be a short break while the writers re-work some lines on the spot, based on how the audience reacted.  The actors then have to quickly memorize the new material.  Many times the actors, or hosts will interact with the audience on breaks, and these are the real gems of the day!

The last of my advice to pass on relates to the amount of time it takes to complete filming.  A typical half hour sitcom could take up to 2 hours or more to complete.  A talk show is usually truer to it’s actual running time, because it’s filmed more like a live show.  A game show can take a few hours as well because there is a whole process involved in interviewing each audience member to determine who would make great contestants.  On some talent related shows, the acts are sometimes done twice in order to get all the camera angles, and when the judges go off to deliberate it can actually take a very long time. 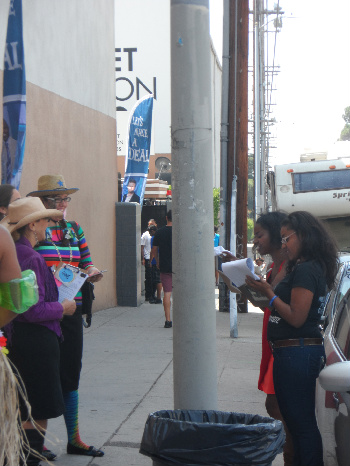 The ‘Clipboard Girls’ interviewing for potential contestants in line at Let’s Make A Deal. 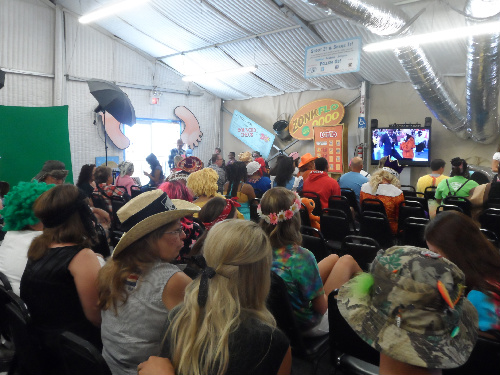 The holding room at Let’s Make a Deal. You arrive here after initial interviews and a visit to the costume rental shop (in case you forgot to dress crazy enough for this audience!)

I would say, prepare for the majority of a full day to be spent on your audience member adventure.  This way you’ll be able to enjoy every single aspect and not be sweating about having to be somewhere else.  Lastly, remember to set up your system to record the episode you were at.  For scripted shows, it’s interesting to see how it all turns out, and for talk shows or live shows, you never know … you just might see yourself in the audience!

Things To Do
Los Angeles