You are here: Home / All Aboard! / Ottawa Ghost Stories and a Chilling Late Night Walk Through the Old Carleton Jail 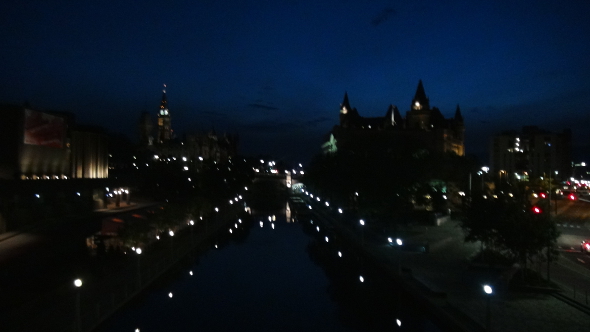 Venturing out on what promised to be an Ottawa night to remember.

What better way to spend Halloween night, after the Trick or Treaters have long disappeared from the streets then by returning to a dark and bone chilling Ottawa night.  A night when I was introduced to Ottawa residents that are only ever discussed in hush tones. A night in which, if you were a Catholic, you might be slipping holy water into your pocket and a crucifix around your neck. I was not Catholic, but I also was not stepping out into what this night had in store for me, without my own form of protection … a ringlet of silver charmed with the protective powers of First Nations’ spirits and the foreboding strength of a golden Asian dragon around my neck. Ironic really that it was First Nations’ spirits and that of a dragon that I called upon to protect me, as that that I felt the need for the aid of these spirits protecting me were from the Spirits of Past Ottawa Citizen since departed (although still very much there). 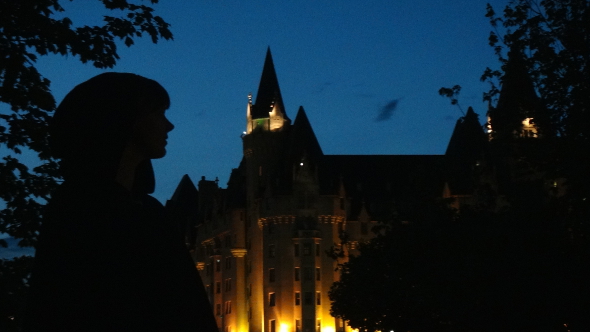 And so the Ottawa Ghost Stories begin with Alison on The Haunted Walk!

You see I was joining the storytellers of The Haunted Walk on an evening stroll through the Ottawa Streets accompanied by a few most eerie tales. What those tales were as we wandered past Canada’s Parliament Buildings and stopped alongside the canal, I cannot tell you, even though I do remember the names D’Arcy McGee and Patrick James Whelan being mentioned. The reason I couldn’t tell you, even though I listened politely to our guide Alison as we walked, snapped photos, and tweeted along the way?  The reason I couldn’t tell you … is that my mind was preoccupied not with the terror of what might be chilling our bones (and dare I say souls) on the Ottawa Streets, but with the terror of where we were heading at that late hour … to the Old Carleton County Jail (otherwise known as the Nicholas St. Gaol) … which to my dread was also where we were sleeping … I place I had yet to step inside and now here I was about to do it in dark of this eerie night.  Did I really want to know of the horrific tales of days gone by in this home to the last working set of gallows in Canada, before I went to sleep in this place?  Would it be worse sleeping there if I left the stories of what had occurred there purely to my imagination?  I did have an awfully overactive imagination. Those were all the thoughts that were going through my mind, until … 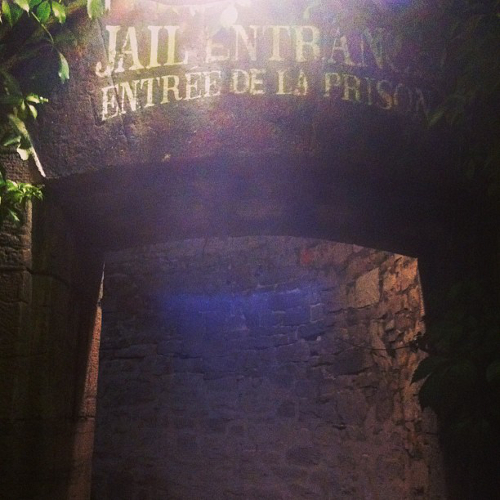 … I walked through the stone archway that lead into the Courtyard of the Old Carleton Jail … at which point my mind was a blank of terror, focused solely on the here and now, and anything I could glean from our guide that would help me survive the night, should I encounter any of the ‘older’ residents of this establishment.

Turns out I was right to be petrified, as unbeknownst to me, I was actually booked to spend the night in one of Canada’s most haunted buildings, rated #9 on the Lonely Planet’s list of the 10 Spookiest Building around the World.  Luckily I did not know that at the time. Had I however, it would have made a tremendous amount of sense to me as I trudged up the stairs to the fated 8th Floor, Home of the notorious Death Row, listening to Alison paint a picture of the Nicholas St. Gaol in it’s prime. 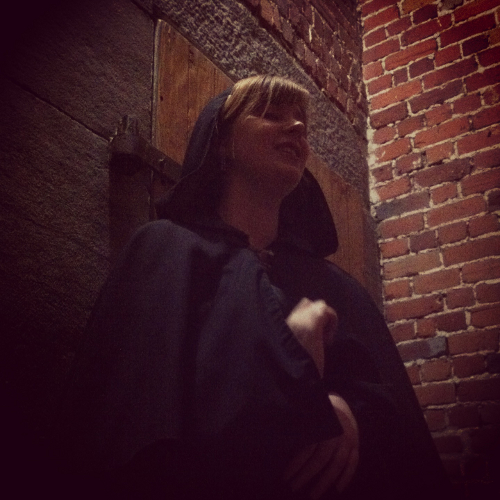 Alison sharing the horrors that was the old Carleton County Jail in it’s 110 years of operation.

Opened from 1862 to 1972, the Nicholas St. Gaol, as it was known at the time, was built as a maximum security holding facility, known as the country’s most effective prison. From the stories I heard, it should have also been known for it’s inhumanity, eventually being closed in 1972 for poor and unsanitary conditions. A place of misery, depression, sorrow and torture. Not only did the jail house murders, but also the mentally ill, those incarcerated for minor infractions such as drunk and disorderly conduct, and new immigrants.  Men and women, and even innocent children all stayed in the prison (up to 150 at a time), forced to share small cells, including 60 smaller cells (1 x 3 metres), 30  larger cells (2 x 3 metres), and 6 solitary confinement cells. Amoung the many pleasures of a stay at the Nicholas St. Gaol, included festering in one’s filth, as prisoner’s were seldom allowed to shower, never allowed to see daylight, and only granted one meal a day. 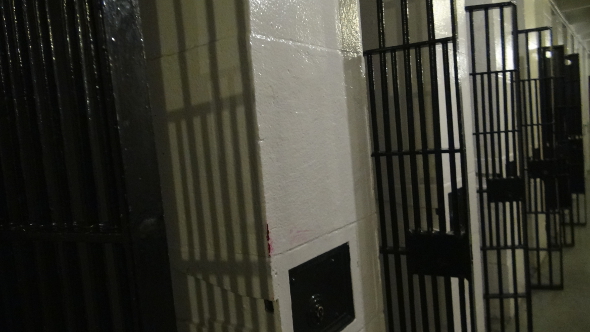 Knowing I am sleeping here tonight, I sure hope it’s not one of these rooms that I am checking into.

I even read on Haunted Hamilton that if a troublesome inmate were put in “Solitary Confinement, aptly named ‘The Hole’ … they had all privileges taken away from them and were stripped of their clothing, chained to the walls spread-eagle, and left in complete darkness. They were unchained for only 15 minutes once a day to eat their food and use the bucket.”

It made my stomach churn to hear that in the mid 1860’s, new immigrants were quarantined in the basement of the Carleton Jail, for fear that they had scarlet fever. As the guards feared entering, afraid of getting sick, they were often left for months at a time and thousands of families died there. Felt rather ill the next morning as I rushed down there to grab a quick breakfast.  The place was cheerful enough now, but was this the same place that many people had been confined, away from the light, and I suspect nourishment?  Not surprising that this space in the building was known for hearing women wailing and children crying … when no one was around. 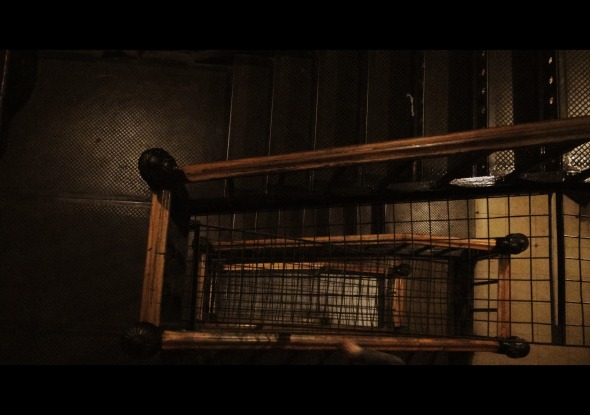 Can’t say as I ever expected to be walking up the stairs of a maximum security prison.

Looking up to see we had now arrived at the 8th Floor, I was not surprised to glance down and see that the staircase had been made jump proof.  I wouldn’t want to live here either. 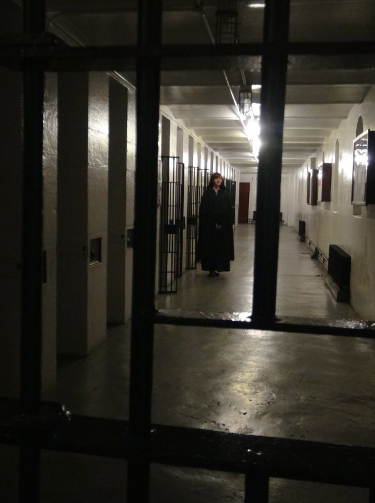 Determining which is worse … following Alison on to Death Row … or remaining by myself on the Stairwell???

We followed Alison into one of the two cell blocks on the 8th Floor … Death Row!  This part of the building was on lock down, functioning as a piece of living history, left in tact, albeit cleanlier, as a prison death row cell block. 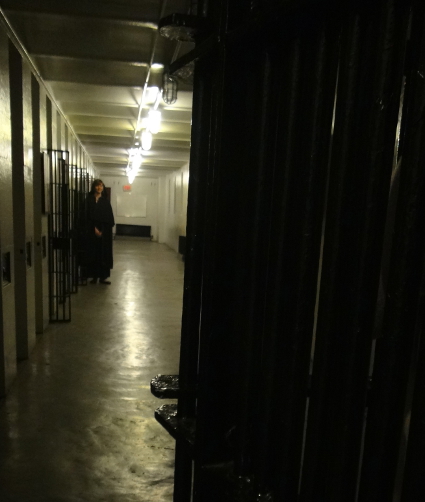 For the experience of it, Erica actually entered a cell and closed the door. 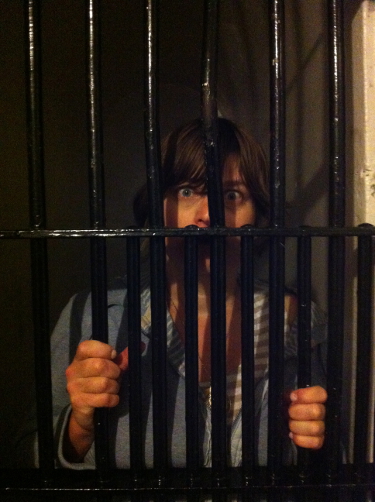 I’m not sure Erica would have actually done this had there been a functioning lock still on the door.

She tried goofing around a bit to mask her fear, shuddering to think when she began reflecting and looking around the space and how confined it was, the Hell that must have been being a resident of this place. 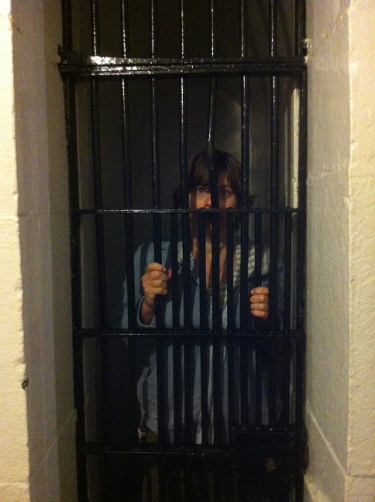 Kept thinking thank goodness we weren’t sleeping here, even though at one time they did offer anyone who could last the full night here, a free night’s accommodations.  I think they have stopped offering that, however, due to too many ‘incidents’. Even if they were, there is no way in Hell I’d want to spend the night sleeping (or not sleeping, as the case would more likely be) in one of those cells.  Was really hoping wherever it was that they had us staying for the night, that it was not in a cell period, especially by myself. 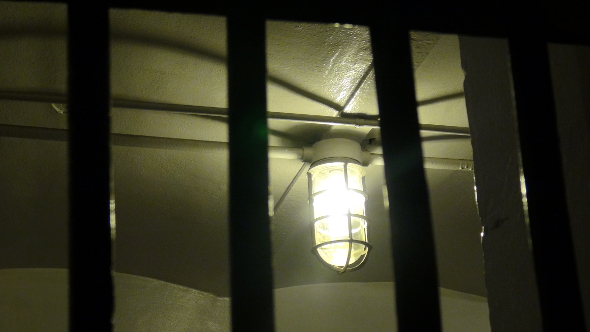 Shudder to image this as my only view day in and day out.

Next up, Alison took us to the other Death Row Cell Block, the row of cells that was actually a line up, counting the inmates in the cells down to their death. And she locked us in! 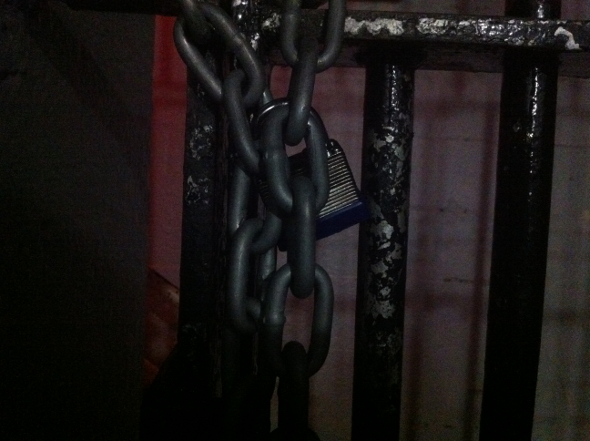 I was not kidding, Alison locked us in. Next stop, the hangman’s noose …

Now you’d think, knowing that the Carleton County Jail only ever had 3 Official Hangings, that there only would have ever been one prisoner here at a time, so they didn’t 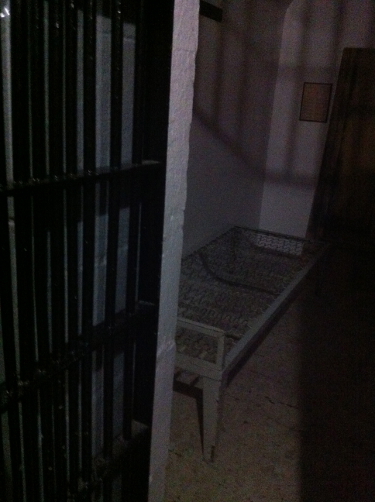 The cell where Whelan spent his final days, proclaiming his innocence.

really need a countdown of cells, but truth be told, the Jail had many other illegal hangings, off the books.  In front of the gallows, there is a wooden beam that goes across the ceiling. From this beam, the guards would hang prisoners from this beam by tying a simple noose around their neck and then throwing them off the 8th floor balcony.

This is also suppose to be the most haunted area of the old prison, and based on how I felt when I was there, I can believe it. And this was the area also most haunted by the prison’s most infamous resident, Patrick James Whelan.  Whelan was one of Carleton Jail’s 3 official hangings, taking place on February 11th, 1869 for the first Canadian political assassination of one Thomas D’Arcy McGee. Throughout his 10-month stay at the Carleton Jail, awaiting the gallows, Whelan proclaimed his innocence. Maybe this is why his soul still haunts the Jail hoping for justice.  Or maybe it is that the judge had promised him that his body would be buried in his family plot in Montreal, not in an unmarked grave, found amoung many unmarked graves in the Courtyard of the Jail.  Whatever the reason, don’t be surprised if you wake up to find Whelan sitting at the end of your bed, head in hands. 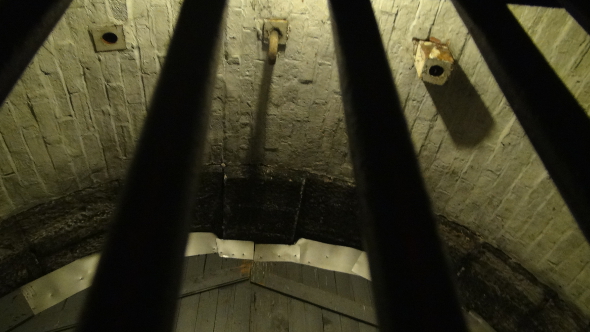 As we left Death Row, we took the same walk Whelan would have taken, to the gallows.  Luckily as we arrived, we unlike Whelan, did not find a crowd of 5,000 waiting to see us swing by our neck from the gallows. We did, however, find a still functioning set of gallows, in the very building that we’d be sleeping in.  A concerting thought to have pleasant dreams on. 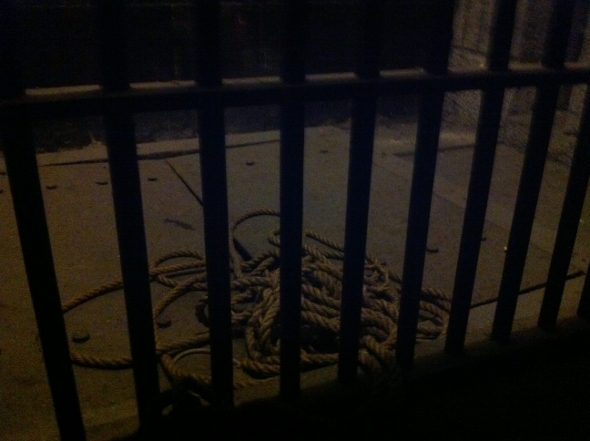 Did I mention that this was still a fully functional gallows?

And with that we walked through the courtyard, past numerous unmarked graves, rounded the corner, and up the front steps of what was now Hosteling International’s Ottawa Jail Hostel.

I was relieved to find that my room was not in a jail cell, and that it was shared with 3 other people. I would not want to sleep here alone.

I did sleep … sort of … with one eye open and an ear out for bumps in the night … and I did survive to write this tale. Am I glad I did it?  Absolutely!  Would I do it again?  Yes, to The Haunted Walk through the Carleton Jail.  No, to the Ottawa Jail Hostel – once was great for the experience, but sadly this was one of those hostels (at least when I visited in June 2013) that give hostels a bad name, due to uncleanliness (gum under the bed and window ledge) and not particularly friendly staff.

That said, if you are visiting Ottawa, I’d definitely recommend and challenge you to spend one night ‘sleeping’ in the Ottawa Jail Hostel, after a tour from The Haunted Walk.

PS. In Full Disclosure: As always, the opinions and thoughts shared here are our own and honest ones. We are bought out by no one. In the spirit of disclosure, it should be noted that on this trip we were a guest of Ottawa Tourism.