You are here: Home / All Aboard! / Nerding Out in Egypt to 40 Million Year Old and Present Day Mangroves

I remember being 14 years old and listening on in fascination as Mrs Jones lectured to us in science class about the many adaptations of the mangrove.

It wouldn’t be until 23 years later that I would lay my eyes on a mangrove, and that first mangrove would not be alive, but rather a fossilized specimen on the floor of a 40 million year old ocean, in what seemed to be an alien landscape from Star Wars. 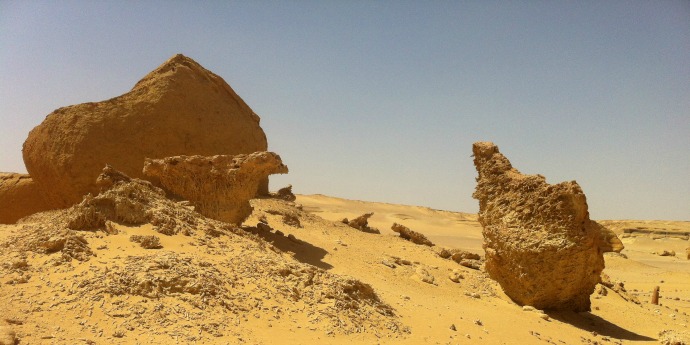 Fossilized Mangroves in Egypt’s Wadi Al-Hitan, the Valley of the Whales.

Egypt’s Wadi Al-Hitan was like something out of my wildest imagination. I don’t have bucket lists, but if I did this place would top that bucket list – I HAVE TO GO BACK. I knew that as I stood there gazing at the roots of that mangrove. Utterly blown away, at this place, that sat there with all it’s prehistoric secrets, seemingly untouched by the elements, at the fact that so much tree had actually fossilized. Such an incredible wonder of nature.  Taunting at the back of mind, I knew there was more to this plant, the mangrove. Being so blown away by the place and processing what was before my eyes, I just couldn’t reach back to that school girl’s knowledge in the recesses of my mind. 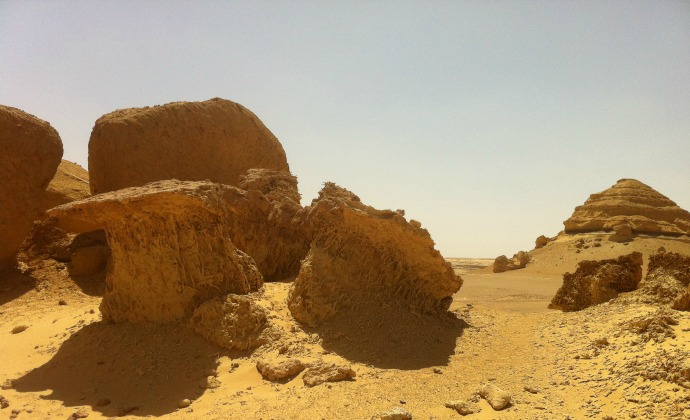 A place I hope to return to one day … Egypt’s Wadi Al-Hitan.

My encounters with mangroves were not over on this trip to Egypt, even if I thought they were. To be honest, as we embarked down the Western shores of the Red Sea, which while beautiful were bordered by the desert and at first glance, barren of much plant life, I did not expect to encounter much plant life at all. But as one comes to discover in Egypt, she is a woman of many mysteries, just when you think you have seen it all, another surprise awaits around the bend.

That was the case on my last day in Marsa Alam. I wondered as I rode the bus, full of Egyptian dignitaries, if I shouldn’t have stayed behind with the other journalists to spend our last day relaxing and exploring in the palatial resort, rather than driving on Egyptian time on this bus that was taking hours to get to its destination, as we seemed to need to make a number of stops – dropping people off and picking other people up. I stopped questioning my choice on the bus trip, the moment we arrived at Wadi El Gemal, the Valley of the Camels. 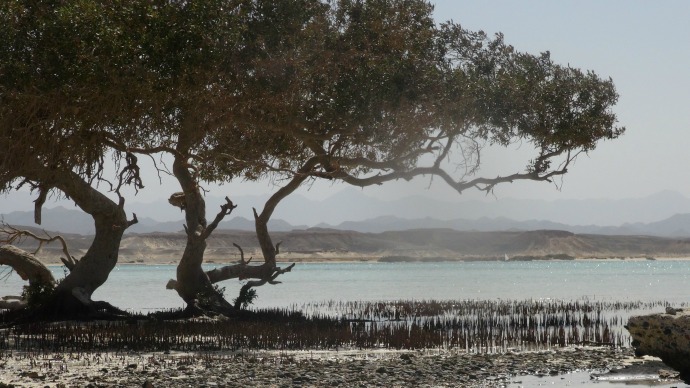 Was I ever shocked at how lush Egypt’s Wadi El Gemal is. An oasis in the desert!

It was a jaw droppingly gorgeous oasis in the desert with shorelines filled with living, breathing mangrove trees, a place filled with magic!

Oh and one of the many morals of this story is if anyone invites you to any place in Egypt that starts with Wadi Al or El … ‘the Valley of …’ the only answer is “YES! What time are we leaving?”

More on Wadi El Gemal in another post, as for now I just want to focus on the beautiful lagoon surrounded by mangroves, which is one of those magical places of beauty that leaves you with a feeling of wonder and blessing at being fortunate enough to experience it. 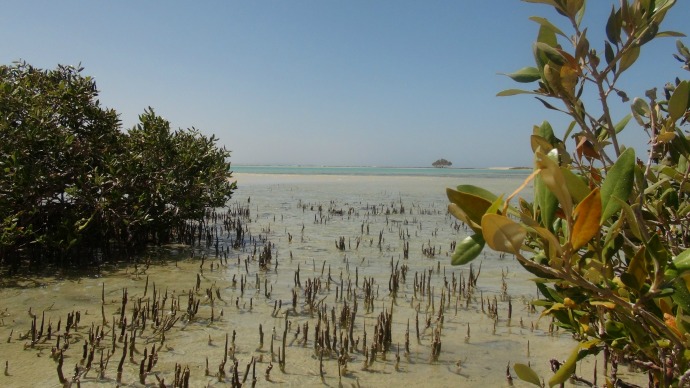 The root like structures around the mangroves that had me pondering.

Being one of maybe 3 foreigners on the bus, all of the interpretive discussion on the mangroves, which I typically nerd out to, was in Arabic, so I wandered through the warm waters of the lagoons instead – exploring, soaking in the beauty and pondering at the uniqueness of mangrove, including the little root like structures that were poking out of the water.

Thanks to the new nature documentary series, Bahama Blues on Love Nature, the question as to what these structures are, was finally answered for me. They are pneumatophores, a specialized root-like structures of some species of mangroves that stick out of the water at low tide, acting like snorkels for breathing.

You see, as mangroves tend to grow in extreme conditions – high salinity, low oxygen, and high temperature environments – they need a number of adaptations to survive, which is why they are a source of fascination in the biology classroom.

Thanks to Bahama Blues recent episode on Mangroves, many of those cool mangrove adaptations flooded back to me:

Not all mangroves use pneumatophores to survive low oxygen environments. Red mangroves, which are usually found in deeper water, prop themselves above the water level with stilted roots, absorbing air through pores in their bark.

Some mangroves, like the black mangrove featured in the above video, secrete salts directly through glands at the base of their leaves. While other mangroves, like the red mangrove have evolved significantly impermeable roots, excluding as much as 90% to 97% of salt from the water.

With the high temperature environments that mangroves live in, it is essential that they conserve their water. To do this, the mangrove can constrict the opening of the stomata in the leaves and can alter the orientation of their leaves to avoid the harsh midday sun, reducing evaporation from the leaves.

Drinking in Nutrients from the Air

The waterlogged soil that mangroves sit in is anoxic and nutrient depleted. To acquire the nutrients that the mangrove needs, it uses it’s pneumatophores to absorb gases directly from the atmosphere. Mangroves then store these gases inside the roots, so that they can process them even when their roots are submerged at high tide. 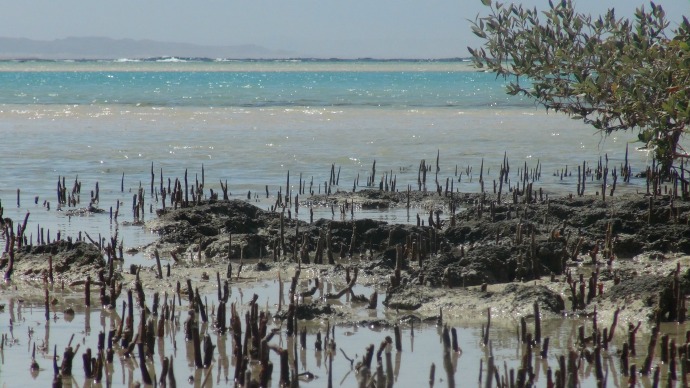 Pneumatophores breathing in nutrients for the mangrove.

Just like sharks, many mangroves are actually viviparous, meaning that they release live young, as oppose to seeds. The seeds germinate while still attached to the parent tree, producing a young seedling or as they are scientifically referred, propagules.

Mature propagules drop into the water and allow the current to transport it elsewhere. During this time the propagule can remain dormant for over a year to survive desiccation. Once the propagule is ready to root, it changes it’s density to float vertically rather than horizontally, allowing it to lodge in the mud and root. If it does not root, it can again alter it’s density to drift again in search of a better place to root.

Perhaps the most beautiful thing about the mangrove though, is that thanks to all of it’s adaptations to survive in the harsh environment that it lives in, it creates habitat for a number of other organisms, making for a thriving ecosystem.  I saw this both with all of the marine fossils found in Wadi Al-Hitan and with the array of creatures I saw as I waded through the waters at Wadi El Gemal.

To discover these thriving mangrove ecosystems for yourself, I highly recommend exploring Egypt’s Wadi El Gamal (and Wadi Al-Hitan, for the prehistoric perspective), and in the mean time, tune into the Mangrove episode of Bahama Blues on Love Nature.