You are here: Home / All Aboard! / Open Water Swimming at the Special Olympics World Games 2015 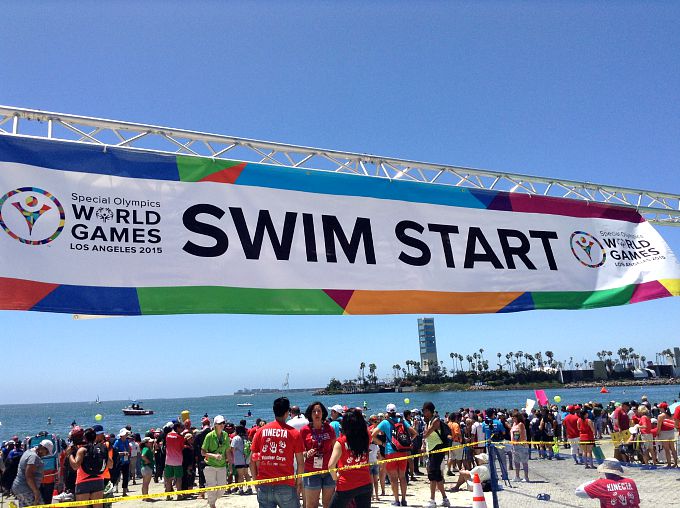 I had an amazing experience officiating the Open Water Swim Race of the Special Olympics World Games 2015! This was definitely one of those volunteer situations where you get more out of the experience than you could ever put into it. I never dreamed I would have the opportunity to spend time with athletes and coaches from around the world and experience such powerful moments. 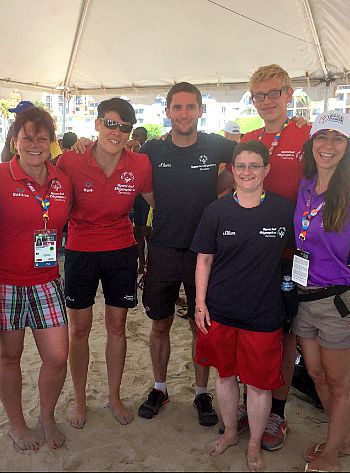 Posing With Athletes From Germany

I was in the athletes’ tent as the session began, standing by as they all checked in. It was amazing to hear all the different languages spoken around me. The professionalism of the athletes astounded me. I had expected there to be nerves and high emotions, but they were very calm, focused, prepared and more than ready for their big race. 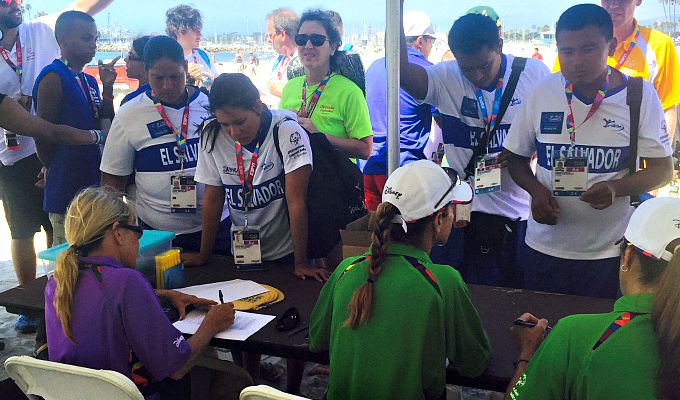 The Athletes checked in and then their numbers were written on their arms, backs, hands and top of their swim caps.

There was a safety briefing before heading down to the water. Alamitos Beach is very shallow for the first few meters so it was important that the athletes knew not to dive into the water to start swimming until they were at least waist deep. Before the briefing was over, the atmosphere of good sportsmanship within the Special Olympics was made immediately apparent. There was an athlete from Uganda whose luggage had not arrived so he was at his big competition without a suit or any of his gear. Within seconds of announcing this, he had everything he needed, pulled together from his competitors. “That’s family!”, someone shouted. 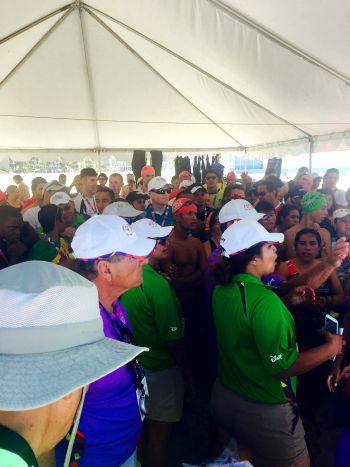 The Safety Briefing: There was a language volunteer team on hand for any interpreting needs.

There is a rule for the Special Olympics which does not allow a country’s flag to be featured on their uniforms. Sponsorship logos are also prohibited. During the Opening Ceremonies the athletes marched in without flag bearers. All of this contributes to the idea of the athletes being unified. Once down at the starting area we were not able to tell which countries the athletes represented. Everyone in the crowd was there to cheer for every single athlete regardless of their nationality. 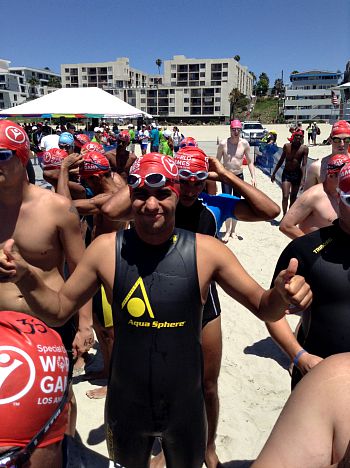 I got to be right in the starting line up with the athletes! We had to make sure no one crossed the line and us standing there in our purple shirts let them know that it was not time to wait for the horn yet. Of course, the starter accidentally squeezed her horn and everyone took off sprinting for the water, leaving us to leap out of the way to save ourselves from getting trampled! With a blow of the whistle, they were gathered back at the start once again. 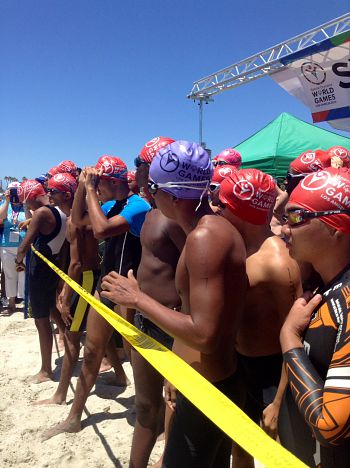 At the starting line ready to sprint into action. I could just feel the energy they were revving up! 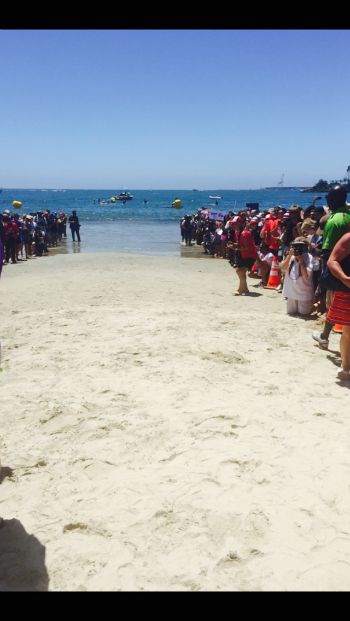 This is what the athletes’ fierce eyes were focused on: the sprinting path to the ocean! This is the same path they would have to sprint back up to the finish.

The men started first and then 2 minutes later they started the women. There was a third race run after that called a Unified Partner Race. This type of race provides a Special Olympics athlete the opportunity to partner with an athlete that does not have an intellectual disability. This gives these athletes a chance to participate when they would not have been able to do so on their own. The races today (or Sunday as the case was) were all about divisioning. I learned that the groupings for awards will all be based on ability and not age or any other criteria. Each swimmer’s time was recorded and then groups will be made according to ranges of time. The top few finishers in each time group will advance to the finals on Thursday, where all groups will swim together, but medals and ribbons will be awarded based on how an athlete places within their group.

The most powerful moments occurred as the athletes left the water and sprinted up the final stretch of sand to cross the finish line. It was my job to record their numbers as they finished so I was right there for all the emotion! The crowd alone swelled my heart as they cheered with all their might for each one of them. To some, it was a distraction and they wanted to stop and high-five people, so we had to jump and wave our arms to keep them running to the finish. Otherwise someone else would pass them! Some could barely walk out of the water, but then a look of determination would light up their faces and they would sprint with all their might. There were a few who collapsed to the ground, having used up every ounce of effort. Pride of accomplishment was in the air with double fists raised up in accomplishment, huge smiles, and some muscle posing for the crowds. I know I’ll never forget the hug I got from one of the athletes as he crossed the line. It was every moment of glory that true sports can bring and I can’t wait to do it all again on Thursday for the finals!