You are here: Home / All Aboard! / Special Olympics World Games 2015 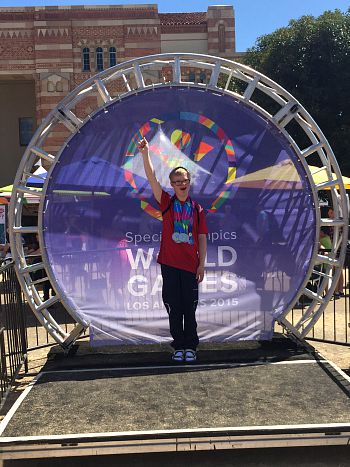 A city heard the call to action, ‘Reach Up LA’, and that’s exactly what they did.  Over 30,000 volunteers signed up to make the Special Olympics World Games 2015 a successful life event for athletes with intellectual disabilities from 170 countries. Little did they know, that these games would do more to change their own lives! I know this because I was one of those volunteers. What started as an opportunity for my high schooler to get his service learning hours, turned out to be individual moments etched in our hearts forever. Moments of overwhelming positivity that I hope our whole ocean of volunteers will carry over into their daily lives and keep the torch burning for a very long time. Everyone I spoke with felt the same way and I could see it in the eyes of others.

This moment right here moved many to tears.

Being able to interact with people from so many different countries all at one time is a remarkable thing. Mostly everyone spoke enough English to get by, which shamed us for not knowing a little more of at least a few of the other main languages. Body language definitely came in handy when two fellows wondered what an apple sauce packet was for. They motioned to squeeze it on their hair with a questioning expression when we then motioned that it was to eat! Their idea had made sense though as they were participating in the Open Water Swim Race so the apple sauce very well could have been hair conditioner for when they were done. 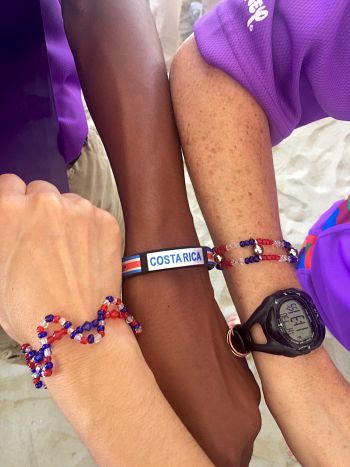 A ‘behind the scenes’ activity of world sporting events is the trading of pins or other wearable items. It’s an amazing way to get talking to other athletes and share an instant connection. We traded American flag pins for these bracelets from Costa Rica!

We were fortunate enough to attend the Opening Ceremonies, be officials for the Open Water Swimming Race, attend a Gymnastics competition through the Fans In the Stands program, and top it off with the Closing Ceremonies. We experienced many firsts, including the debut of cheerleaders for the first time at any Special Olympics World Games. I have compiled a video of highlights from all of these experiences and hope that through it all you catch the contagious love of the crowd, witness the pride of hard work, and fill your cup with all that is good about the human spirit!