You are here: Home / All Aboard! / Ringing in the New Year with a Colombian Tradition for Travel

2015 was year filled with personal challenges and a great appreciation for the incredibly supportive family and friends that I am blessed with. Feel so very fortunate to have these people in my life. 2015 was also a year of incredibly itchy feet for me – feet itching for an adventure, but as circumstance would have it, it was a year in which I had to stay closer to home. 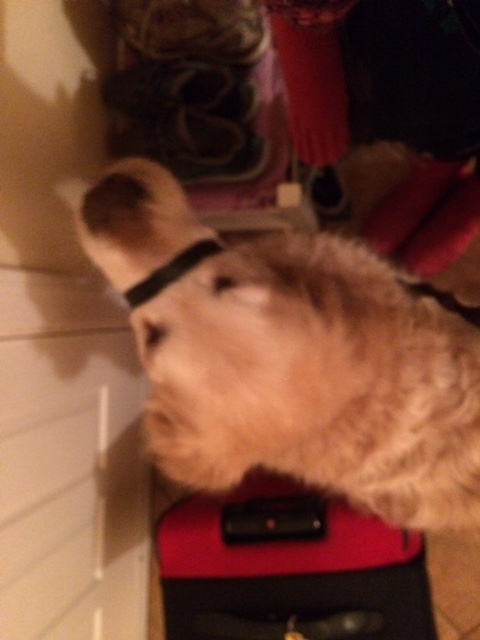 Satchmo, the red boots and I getting set to embark on our first adventure of 2016.

Given that, I couldn’t help but smile when Steffani Cameron (aka Full Nomad) told me that at the strike of midnight on New Year’s Eve 2014, she had walked around the block with an empty suitcase.  You see, it is a Colombian New Year’s Eve tradition / superstition that if you walk (or in some cases, it says ‘run’) around the block with an empty suitcase at midnight, that your coming year will be filled with travel. For Steffani, 2015 was the year she hit the road on her 5 year adventure.

As midnight approached last night, I was curled up with a port and a movie with Satchmo (the golden retriever), recouping from the flu that had spread through the neighbourhood, and this Colombian superstition kept teasing at my synapses. So at 11:54 pm I pulled out an empty suitcase, threw on a jacket, and clambered into our red boots, and Satchmo and I waltzed out the door at exactly 11:59 pm to begin our trek around the block with the suitcase in tow. What was going through Satchmo’s mind as he pondered why we were wandering the streets at midnight with an empty red suitcase, I am not quite sure.  But aside from the odd pondering sideways glance, he seemed up for the adventure, as we heard sounds of fireworks and New Year’s cheers from festive neighbours, who were for the most part unseen on the empty streets. 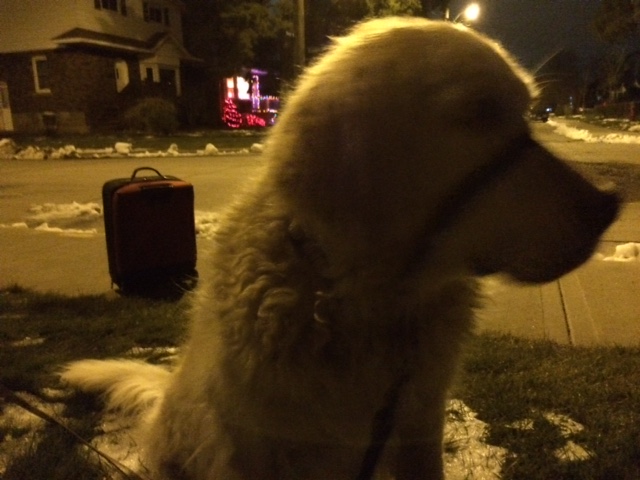 The empty, yet sound filled streets at midnight on New Year’s Eve 2015.

Shortly after returning the suitcase to the house, Satchmo and I embarked on our first adventure of the year, through the fields and forest on a midnight walk in search of the whispered about Northern Lights from last night’s solar storm.  Alas, the night sky was too cloudy to be rewarded with such a New Year’s treated, but the air felt lovely and refreshing, and this was the perfect start to our year.  As for those elusive Northern Lights, we’ll be venturing back out tomorrow night, January 2nd, when there are predictions of an even stronger solar storm.  Maybe we’ll take hot chocolate this time.  Fingers crossed.

Would love to hear how you spent your New Year’s Eve in the comments below.