You are here: Home / All Aboard! / La Jolla Cove: A Hidden Gem of Southern California

In collaboration with Expedia.com

My family traveled to a few destinations this summer, mostly for the purpose of touring colleges for my son. I was expecting to experience a few new restaurants out of the trips, but that was about it in terms of travel expectations. I suppose I should have known better, because what I love the most about travel is the unexpected discoveries and it should have been no surprise that we found an incredible one! When researching accommodations for our trip to tour UCSD (University of California San Diego), I was pleasantly sidelined to La Jolla Cove, a small community of San Diego, in which it turns out UCSD is located! La Jolla Cove is quite the hidden gem of Southern California! Until doing my research I had never heard anyone even mutter the fact that you could kayak, snorkel with tropical fish, and swim with seals within any driving distance from Los Angeles. 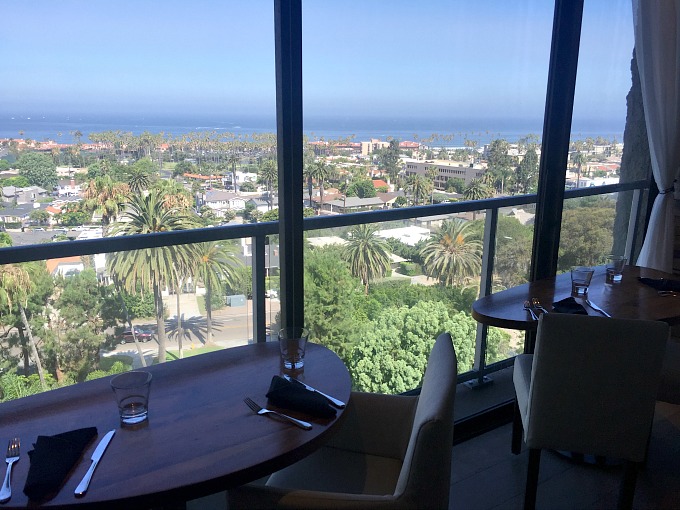 An overview of the cove as viewed from the Hilton La Jolla Curio Collection restaurant.

As soon as you enter the La Jolla Cove area, which for us was when we turned down La Jolla Shores Drive, you realize you are in that quintessential quaint beach town you long to be in all year long! The kind of place where you can feel your mind switching over to vacation gear with every whiff of fresh beach air. Every minute of our trip lived up to this … from the adorable bikes free to use at the hotel, to the atmosphere at the actual cove and the surprising array of art on the streets. 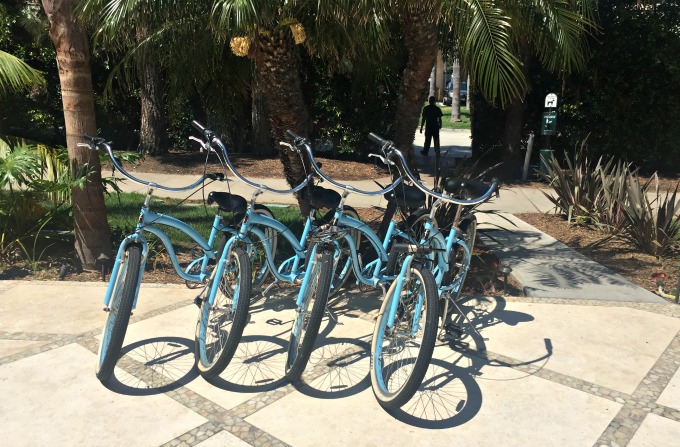 First come first served free bike usage at our hotel. These are exactly the type of bikes I picture when I envision riding through a beach town!

Without hesitation, we bolted to our first stop ~ the beach at the cove! My anticipation for seeing seals in their natural habitat had been building the entire car ride and I was trying hard to be prepared that there might not be any there that day. As soon as I opened my car door, I knew I wasn’t going to be disappointed. I could hear them barking already and we were not even parked very close. I had no idea how loud they can be! 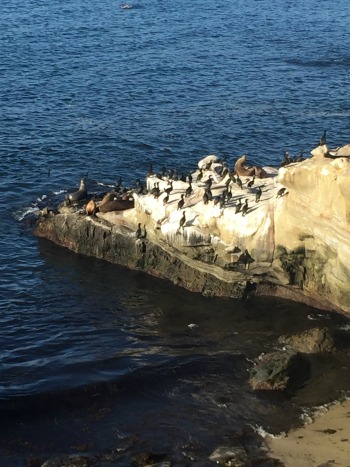 The seals and sea lions (and birds) were everywhere! Clearly they have already spread the word about this hidden gem to their community.

Looking down and along the cove, there were various groups of kayakers on sightseeing tours and snorkelers – not just swimming amongst the seagrass, but right alongside the seals and sea lions! We were cautioned by our concierge that swimming with the seals really isn’t advisable and there is a real danger there, but it was wonderful to see humans and marine life coexisting and having such a great time. Despite the obvious danger of being bitten, I can tell you some insider information … the seals poop in the water, and it’s not pretty (spoken as an up close eye witness to the act)! Also very important to note is that one should never get close to a baby seal pup. If you don’t see the mom around you may think it is safe to approach them, but the mom will be watching from a distance and if she senses you are a danger she will not return to that spot, leaving her baby abandoned when they are far too young for that. NOAA Fisheries explains it well in their No Selfies With Seals Document. 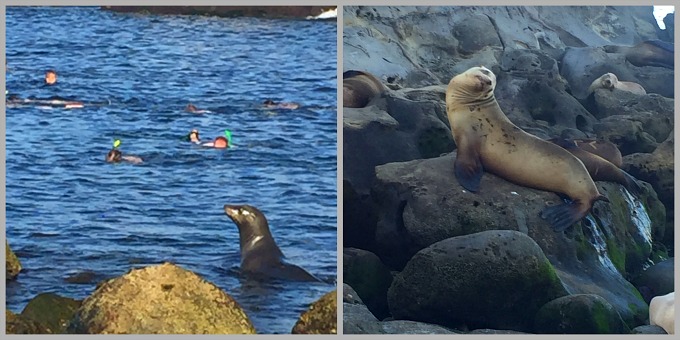 We were all in complete awe of this experience!

We did not snorkel ourselves, but there is plenty to see and apparently during the summer months just down the beach at La Jolla Shores you can snorkel with a school of leopard sharks (or shiver as they are also called, and what I get just thinking about it)! The adventure is yours for the taking and there are plenty of guided tours to research if you don’t want to head out on your own. This goes for the kayaking as well. It’s also possible to hike along the top cliffs of the cove.

After a short walk up from the cove to the first main street (Prospect St), we discovered that this quaint little beach town is quite high end! We found great restaurants with views of the ocean as one might expect, but to our delight there were many little cutting edge art galleries and haute couture boutiques! 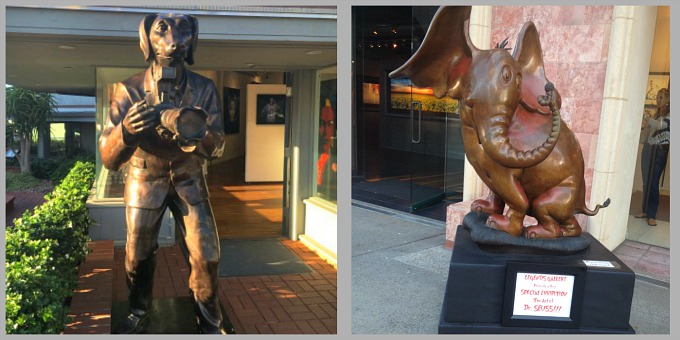 Two of the stunning greeters outside of different art galleries on Pacific St.

A very short drive from the La Jolla Cove area is La Jolla Shores, as mentioned above for the leopard sharks. This really does just feel like an extended part of the same community. At the Shores there are additional restaurants, beach rental equipment spots and a more expansive beach area. In both areas you can expect high prices reflective of the cuisine and atmosphere. You will also most certainly encounter the friendliest of locals excited to make sure your time there is perfect. I know my family is very grateful that I stumbled across this great gem in my vacation planning. 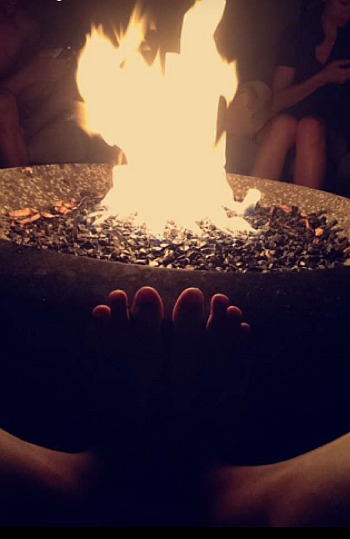 With no bonfires on the beach we were fortunate to end our quaint little beach excursion with our toes by the fire near our hotel pool at the Hilton La Jolla Curio Collection.