You are here: Home / Archives for Filmgate Miami 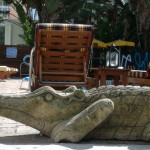 After one terrible hostel experience in Banff during the Banff Television Festival, I made a judgement call on hostels ... thinking they were all thin walled, with less than comfortable beds, intended for immature party obsessed late teen and early 20-somethings (I think I was a late 20-something at the time).  Now don't shoot me for this judgement ... in my first night at the … END_OF_DOCUMENT_TOKEN_TO_BE_REPLACED