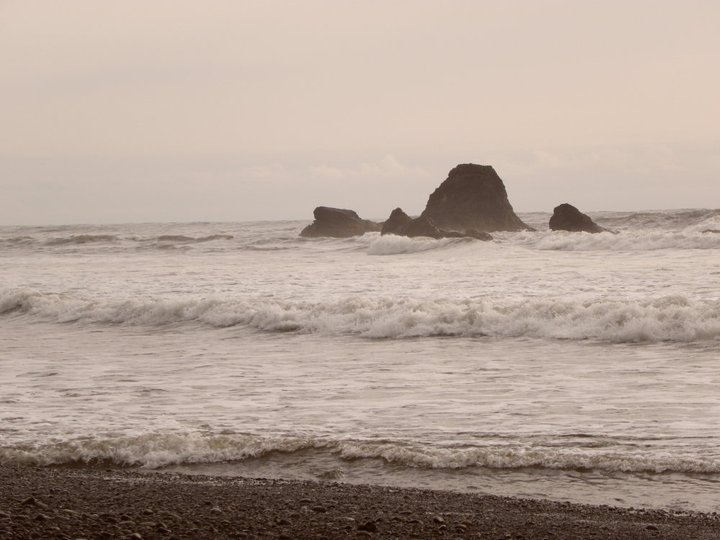 I am a sleepyhead, but on this trip I realized I cannot sleep when I am cold.

In the middle of the night, I suddenly felt so cold I woke up. My hands were freezing, as were my legs. I curled up into a ball in the sleeping bag and used my scarf to cover half of my face, so that I would be warmer. However, I was too cold, I could not fall back to sleep. I just lay there, eyes closed, trying to think up some ways to warm up. I did not really want to bother my boyfriend since I knew he was deeply asleep (based on his snoring). For most of the night, I just listened to the sound of nature: from the choir of frogs to the chorous of birds. I must say they sang better than Rebecca Black (but who am I to judge).

Anyways, it was not good to not have enough sleep and suffer from the cold. I ended up having a huge headache. We quickly packed everything and went to the nearby beach, Rialto, to take a few shots. The beach was so wide, as was the ocean. I saw the big white waves crashing onto the shore and the huge rocks in the ocean. The view made me feel pretty tiny since everything was so huge, including the rocks I sat on, the bald white trees that were standing behind us and the huge ocean. We spent a while there to let the wind slap our faces and to walk through the sand hand-in-hand. Then, I picked up a few unique rocks as souvenirs of this special trip (my boyfriend later told me that we should not have taken anything out of the park.)

After enjoying a bit of nature, we went to Forks for breakfast. I was rather clumsy due to the lack of sleep: I dropped a piece of bacon on the floor as it was too hard for me to poke the fork through. It was good to have a rather long car ride to get to Hoh Rainforest. This was the original site that we wanted to camp at, but because of the time constraints, we just went for Mora.

When we arrived, we first went to the visitor centre to get some suggestions on trails. The lady who worked there was really nice; it definitely warmed me up in the early morning. We went on two popular trails: the Hall of Mosses and the Spruce Nature Trail. These two trails were rather different. One of them consisted of tall trees that were covered with green fluffy hair mosses. The other one had giant monsters with long hairy arms, similar to what you would see in Vancouver.  Both of the trails were rather short, so within an hour, my boyfriend and I had already walked through them. Therefore, we decided to go onto another trail, the Hoh River, since the lady at the visitor centre did recommend this trail for looking at waterfalls.

The view along the Hoh River Trail was quite pretty as basically we were walking along the river. On the opposite side to us, there were trees that looked quite fragile. They had super thin white trunks, and grew along the water. When the wind blew, they just swung side to side like they were dancing with each other. It was just so elegant. They’ve become my favourite trees (but I do not know their name). Anyways, it was a long walk to get to the waterfalls. I kept on mumbling on the way, because we had walked for a long time. It took us at least two to three hours to get back to the parking lot from the waterfalls. However, the falls were pretty great. It was so long and high up in the mountain that I could not really take a good shot of it. Before the giant fall though, there was this little one with many rocks in the middle. The rocks looked super cute with the green mosses growing on top of them. We took a break to have some trail-mix: chocolates+walnuts. It was quite romantic for us to sit in the middle of this greenness and listen to the free music of the water. We even saw a woodpecker on our way back. It was worthwhile to get to our destination even though I did complain quite a lot on the way, and my boyfriend did not say anything about that (thank you!).

After exploring the greenness, we went to our final stop which was the spot I looked forward to the most – Ruby Beach. When we arrived, it was like five or six. The sun was no longer high up in the sky, which was a good thing, because it made the sky much more colorful. The view was amazing with the wide ocean and these gigantic rocks in the middle of it. They were shaped like triangular buildings, and one of them was like a bridge with a little hole in the middle. It was unfortunate that the water was so cold and it was windy. If not, I would have crossed the water to the other side to take a few good snaps of the rocks. This little place of the park made me feel like I was in a dream, because the view was surreal. This place was just so peaceful, even though I could hear the huge waves crashing on the shore. Nature had shaped a really wonderful scene before my eyes. It was a hidden gem in our Olympic National Park firsts. This wrapped up our trip to the Olympic National Park; we do have plans to return though, as the park has so much more to see.