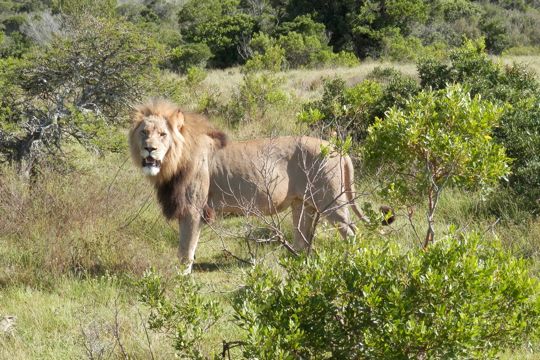 When in Africa, one must go on a safari. In fact, along with shark cage diving, seeing lions on a safari was at the top of my list for things to do in South Africa. Perhaps it had something to do with multiple viewings of The Lion King when I was a child, but I couldn’t wait to see lions out in the wild.

When I had thought about going on a safari before, I had always envisioned trundling along in a jeep in the African desert. As a result, I didn’t expect the environment to be so lush. As we weren’t quite in the desert, that meant we were driving through lots of bush and tall grass, and we really had to keep our eyes peeled for animals. This was no zoo, oh no, this was a hunt.

Our first game drive was at Addo Elephant Park. We were all very eager to see lions, but we were told our chances were slim. They only had a few lions and guests rarely ever saw them. Still, we kept our hopes up.

The first animals we saw were a leopard tortoise, followed shortly by a warthog. After a round of “When I was a young wart-HAAAAAWG,” we observed the mother warthog and her baby. Suddenly, a male warthog came out of nowhere and rushed the baby! Our guide told us that male warthogs will attack the babies when the mothers are not sexually willing. We watched the male warthog chase the baby in circles while the mother tried to interfere. Luckily, the mother and baby managed to hide from the male after a few close calls.

Afterwards we spotted some kudu, a type of antelope and the emblem of South African National Parks. Then, near the watering hole, we came across elephants! I couldn’t believe how many there were. We watched a few elephants cool off by using their trunks to chuck water on their sides. Then, a small herd of elephants walked right in front of our truck! I couldn’t believe how close they were. There was even a baby that squeezed under its mother’s belly, a sign it was still under one year.

At the end of the day, we didn’t see any lions, but we were pretty pleased with everything we saw. Plus, we still had two more game drives.

The next day, we headed to Kariega Game Reserve. Our first game drive was in the afternoon. Still on a lion hunt, we kept our eyes peeled. But it was so difficult to spot anything in the brush! We did spot a horn-less rhino though. Rhino poaching is a big issue in South Africa due to the high price of rhino horns in Asia, and the park had removed the horn of this rhino to deter poachers.

We caught a glimpse of a few female lions disappearing into the brush, which was such a tease. However, we got distracted when it started down-pouring out of nowhere! Within a couple of minutes we were soaked. But it only lasted ten minutes before it was gone.

The next morning, we woke at 5:30 for an early morning game drive. Dawn and dusk are good times for animal spotting as the temperature is still cool. The first animals we spotted were a whole herd of zebras crossing the road. They were so cute moving along – one even stopped to roll around in the road a bit!

Driving along, we spotted more rhinos. Again, they had no horns but this time it wasn’t just the park’s doing. Our guide told us one of them had been attacked by poachers, but luckily had survived. Usually, rhinos don’t survive poaching as poachers cut directly into the skull to retrieve the whole horn, but this one miraculously had.

We were admiring a giraffe when our guide received a call on the radio. Another group had found the lions! We took off, eager to finally see them.

When we arrived in a clearing, there were seven lions lounging in the shade of small bushes. They were yawning and relaxing. “Lions sleep up to 18-20 hours a day,” our guide told us. Not a bad life, I thought. Though I knew how dangerous they were, I couldn’t help but find them cute; I even felt like cuddling one!

We watched as one by one, the lions got up and moved to the shade of a different bush. At one point, one walked right by our truck. It suddenly occurred to me that if it wanted, that lion could leap up into the truck and take us all. I sat there, frozen. Perhaps not so cuddly after all.

It was fantastic finally seeing the lions after three game drives. It had been well worth the wait and if anything, it made seeing them so much better after all the anticipation. Of course, you can always go to a zoo and see lions, but it’s something else tracking them down and seeing them in the wild. We all left Kariega pretty happy after our successful lion hunt!

Disclaimer: This post was not sponsored by any of the game parks mentioned. My opinions are my own.

Things To Do
Port Elizabeth