You are here: Home / All Aboard! / A Solo Girl’s Guide to Hitchhiking to Tofino – Part 1

I had this crazy idea to hitchhike to Tofino. Even though I had heard hitchhiking was fairly common on Vancouver Island, it was crazy because I was a girl and because I wanted to go alone. I didn’t own a car and my attempts at finding at ride share on Couchsurfing proved fruitless, so I was left with one option: Hitchhiking. (Of course, I could have always taken a bus, but that never seemed like a real option to me, as it was outside of my budget.)

I had hitchhiked once before from London to Prague. In that case though, I was with two other people, including a guy who is now a Marine, so suffice to say I felt quite safe on that journey. It took six days, five countries, and three foreign languages but we made it to Prague in one piece and with a million stories. It had been the perfect first experience to hitchhiking. 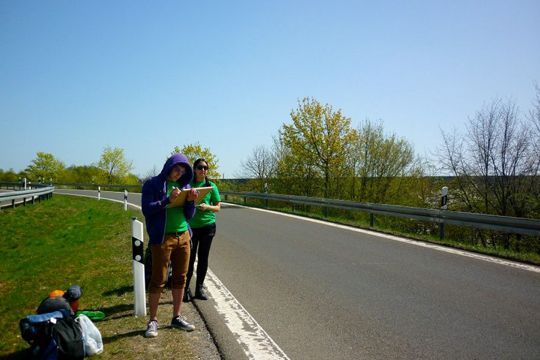 On a road somewhere in Germany

So if anything, hitchhiking to Tofino seemed easier: it would only take one day, I didn’t have to cross any borders, and there wouldn’t be any language barriers. And I knew what I was doing, thanks to my hitchhiking journey prior. But I was nervous about going alone. I did some googling beforehand about hitchhiking to Tofino and I couldn’t find anything about single girls going alone. But single men had written about their experiences, finding the overall trip safe and feasible. I ignored the little voice in my head telling me I would be kidnapped and killed and decided to go for it.

I took the 8:30am ferry from Horseshoe Bay to Nanaimo. One of the most important safety rules of hitchhiking is to never hitchhike after dark so I wanted to give myself plenty of time to reach Tofino. I figured I’d have to break up the journey and hitch a few rides to make it all the way to Tofino. On the ferry, I made a cardboard sign that read “TOFINO” and walked around carrying it, hoping someone might approach me. I felt a bit nervous and a bit like everyone was staring at me – that crazy person trying to hitch a ride.

When the boat was docking at Departure Bay in Nanaimo I went down to the entrance to the vehicle deck. Holding my sign, I started to ask, “Is anyone going towards Tofino? Or Port Alberni? Highway 19, north?” People came in droves but no one offered me a ride. Some smiled at me and said, “Sorry, going the other way!” while others just eyeballed me. I was starting to feel discouraged and like this had been a stupid idea. 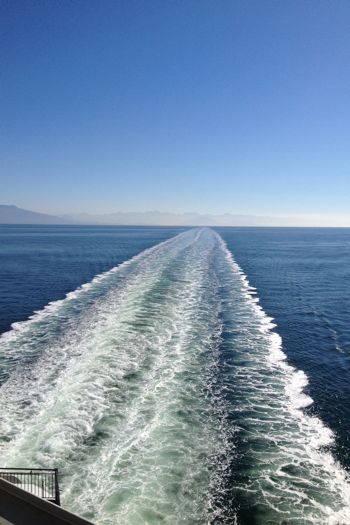 On the ferry to Nanaimo

Then a man, who had been heading down towards the lower vehicle deck turned back and offered me a ride – all the way to Tofino! I could hardly believe my luck. Not only had I found a ride, I wouldn’t have to stop and try to hitch a ride at any other point.

Down in the vehicle deck, the first thing I did was take note of the license plate number and text it to a friend. It was just a precaution, but better safe than sorry. It turned out I didn’t have to be worried. My drivers to Tofino were two older fishermen, in their 40s or 50s, who were very friendly and incredibly generous. When we stopped in Port Alberni for lunch, they floored me by buying me lunch at A&W, as well as picking me up a bottle of juice when we stopped for gas. I was so surprised; they were already driving me all the way to Tofino and now they were buying me food to boot. I tried to pay them back, but they refused to let me. 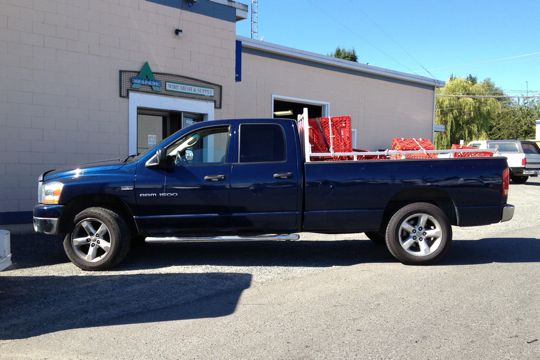 My ride to Tofino

Despite it being a three-hour drive, the ride passed quickly. It was a beautiful day and I couldn’t stop admiring the scenery. I suppose the only downside to hitchhiking is not being able to pull over when you see somewhere you’d like to stop. I made it to Tofino by 2pm and my very kind drivers even dropped me off right at my hostel. I couldn’t believe how well it had worked out. Not only had hitchhiking been a success, it had almost been too easy. Now, my nervousness at the beginning seemed silly!

… That said, this was only the first leg of my journey … read on tomorrow to hear how I faired from Tofino to Ucuelet, and for a list of hitchhiking tips I learned from the experience.

Nervous for me?  *Spoiler Alert* I did survive, or else I wouldn’t be able to write this.