You are here: Home / All Aboard! / Vancouver Theatre: A Christmas Carol at Pacific Theatre

A Christmas Carol at Pacific Theatre made me want to dust off my old Dickens‘ and revisit the wily old storyteller of my youth. Pacific Theatre’s production of the story was framed as a celebration of storytelling itself: the play unfolds as father and daughter close up The Old Curiosity Shop, after which they settle down by the fire and Father opens a book to read aloud to the expectant girl (Kathleen Nisbet) kneeling with her fiddle at the hearth.

The book is an old Christmas favourite, and we know the story well. It begins as it always has: “Marley was dead: to begin with.  There is no doubt whatever about that.” But on stage the book doesn’t stay open for much longer than it takes Ron Reed to read the opening line. The storyteller soon casts the book aside to enact the vivid characters that arise as the pages turn, preserving the quaint English idiom I love the novel for, and making it colourful by bringing the characters to life in a way I had not imagined possible. 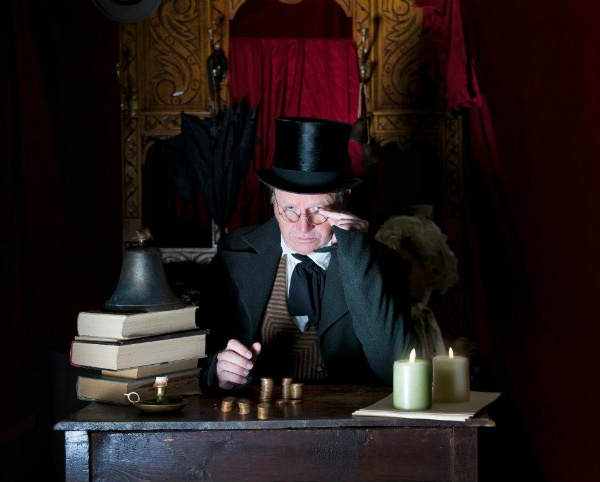 The Scrooge in this production was surprisingly endearing — nothing like the miserly caricature I’ve seen in movies, which I now think have cheated us all of the delight that could be Scrooge. Yes, in this play he is gruff and mercilessly unfestive, but also fragile, clearly miserable, lonely and mistrustful of the world at large. He’s like a curmudgeonly grandparent, so set in his ridiculous ways that it’s funny to see. Even like a kitten that puffs out her fur when threatened, so as to look bigger and meaner to possible intruders.

I really appreciate the director’s interpreting Scrooge this way — it makes the story much richer and more meaningful for me, as he is no longer the penny-pinching miser who deserves to be shocked by ghosts and rattled by unhappy memories for his cruelty, but an eveyman who courageously submits to the difficult lessons he is led through, and makes a life-changing — world changing — transformation overnight. 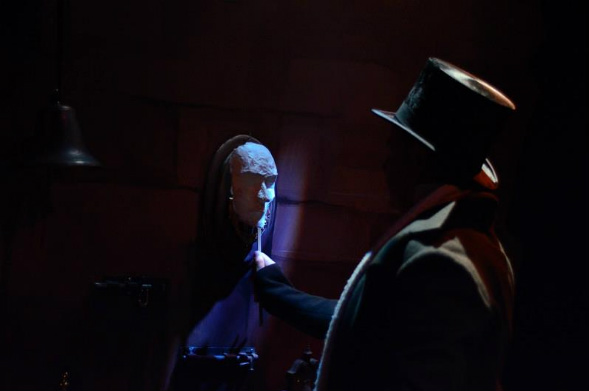 Ron Reed switches between characters so briskly that he’s in dialogue with himself. His transitions are a sight to see: one moment he’s issuing a sincere gale of laughter, all red in the face and jovial, and in the next, he’s hunched, growling and proclaiming Bah! Humbug! like he means it. The set is a pleasantly cluttered curio shop with strange hanging wooden puppets, trains, doll houses and all variety of knick knacks hiding in the woodwork, some of which become haunting or hilariously improvised props as the shadows grow darker and longer. It transforms into a variety of times and places without leaving the original setting.

What is remarkable about this play is that we are being called upon to imagine, just as a listener or reader is called upon to imagine, the change of scenery and time and place.  Scrooge travels over countrysides, into bustling cities, looks into houses at merry parties, is whipped through supernatural portals, trembles at the expressions of invisible ghosts — and we are transported with him. Even when Scrooge and his ghostly guide are depicted as dolls being flown across the ground in Scrooge’s hands, or when a hand in a bonnet represents a woman, or when tiny shadow puppets are used to signify bigger, more ominous things. 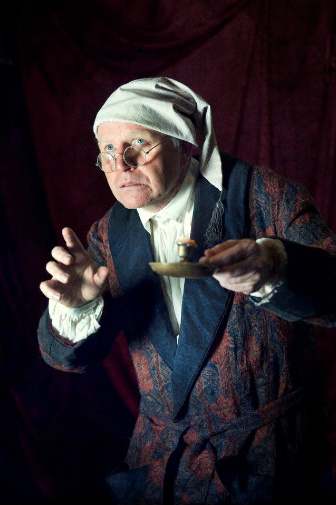 I love how both Ron Reed and Kathleen Nisbet play-act the story like resourceful, imaginative children. Watching them on stage made me wonder why adults don’t spend their evenings enacting favourite stories with the odds and ends available. It made me miss being a child and making up stories, designating the couch as a formidable dungeon, the footsteps of a parent upstairs as a sign that enemies were near, and creating ridiculous costumes, solemnly worn, out of gift wrapping, blankets and ribbons and cushions. This play is a great reminder of the joys of simple storytelling — and a reminder that we need not wield high-tech media or special effects to partake in them.

Winter is traditionally a time for stories, as people huddle together, taking shelter, keeping warm, and keeping each other entertained. And for this reason I think Pacific Theatre’s A Christmas Carol very well-timed, as it reminds us how warming stories are, and that all we need to do is love stories to tell them.

A big thank you to director Sarah Rodgers (who also directed another play I loved this season) and the vivacious cast (Ron Reed and Kathleen Nisbet). Also congratulations to the creative talents  that helped make the story look and feel so charming; among these are lighting designer Lauchlin Johnston, set designer Bryan Pollock, costume designer Nicole Bach and properties manager Yatsuyo Shimosaka.

You can see Charles Dickens‘ A Christmas Carol at the Pacific Theatre until December 31. Shows run from Wed — Sat at 8 p.m., with matinees on Saturdays at 2 p.m, and an extra matinee on Wednesday, December 28.