You are here: Home / All Aboard! / Great Eats, Local Finds & the MUSEUMS in the MuseumsQuartier, Vienna’s Outdoor Living Room – Part 2

This is the second part of a 2-Part Series by travel writer Jacqueline Swartz on Vienna’s MuseumsQuartier. This second part focuses on the restaurants, shopping and museums.
Here’s the first part in the Series: Celebrating a Decade of the MuseumsQuartier

MuseumsQuartier’s (MQ) restaurants add to the artfully casual ambiance. On summer nights, the outdoor cafes buzz; when the weather turns grey, people head indoors. One popular place, Die Halle is in the former riding stables of the Emperor. With soaring ceilings and leather covered benches, it’s a cunning mixture of old and new. It looks like a chic restaurant, but it’s casual and inexpensive, great for solo travelers like myself.

Breakfast is served until late, and there are salads, soups and wraps – Die Halle satisfies. The bar offers an extensive wine list, including the Austrian specialty, Gruner Veltliner, a crisp mineraly white.

The flagship event marking the the MQ’s tenth anniversary was the reopening of the MUMOK (Museum of Modern Art Ludwig Foundation Vienna), the largest museum for modern and contemporary art in Central Europe.  The collection includes early 20th century paintings and sculpture from Wassily Kandisky, Paul Klee and Alberto Giacometti. There are important Pop Art works by Andy Warhol and Roy Lichtenstein, as well as conceptual art from the 70’s.  In February 2012, MUMOK will hold a major exhibit of the early works of Claes Oldenburg, which will tour major museums, including The Modern in New York.

Of course, the MUMOK has its own restaurant, with freshly sourced ingredients.

You can order food to go and sit in the cobblestone courtyards, where molded plastic seating is spread around in colors that change every year and configurations that are creations in themselves (see the igloos during the winter).  Designed by architects, these plastic chaise lounges, called Enzis, are typical of the new Vienna, where contemporary design mixes with grandiose palaces. 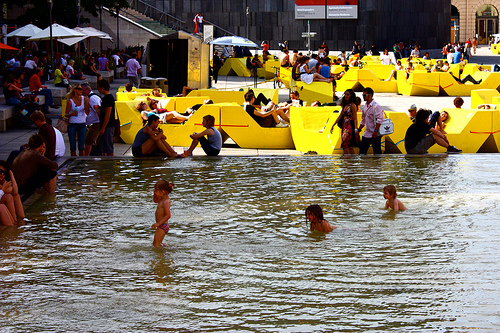 The Courtyard at the MQ, as photographed by Daniel Nunes

There are many other choices of cafes and restaurants. One, Corbaci, is next door to The Austrian Museum of Architecture (Architekturzentrum Wien). It has a domed ceiling covered with ceramic tiles. The food is Austrian casual. Lentil soup, with or without smoked sausage, spaetzle (dumpling-like noodles) with leek; and of course homemade strudel. Next door, The Austrian Museum of Architecture is easily accessible on the ground floor. It offers a journey of the history of city’s architecture through displays and videos. The experience is all the better because visitors rub shoulders with architecture students. 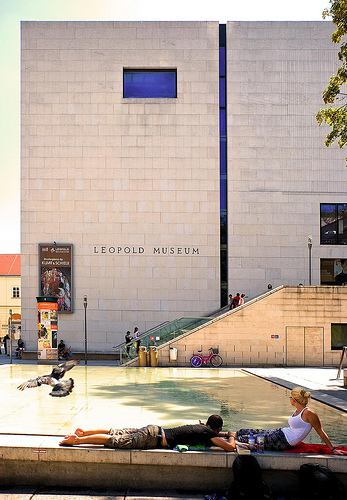 Just down the cobblestone courtyard is one of the most popular attractions in the MQ, the Leopold Museum. This is all about Vienna’s glorious, doomed turn of the century.

What a time it was: Gustav Klimt was painting The Kiss, while Freud was exploring the subconscious. Mahler was composing his heart-breaking music (and lying on Freud’s couch while he anguished over his wife Alma’s infidelity).  From the arts and crafts movement, known as the WienerWerkstatte, emerged art nouveau and deco-like designs that still beguile today. The stylish, provocative eroticism of that time remains part of the Vienna vibe, along with a robust enthusiasm for the arts.

The Leopold is my favourite museum in Vienna.  It has the world’s largest collection of works by figurative painter, Egon Schiele; there are also paintings by his teacher, Gustav Klimt and other contemporaries.  A permanent exhibit, called Vienna l900 is an experience in time-traveling; there are displays architecture, ceramics and furniture of the early 1900’s, along with the paintings.  On the wall are large chunks of text from Sigmund Freud: “The unconscious is the true psychological reality”, it read. Freud said, describing a certain male complex; “Where he loves he cannot desire, and where he desires he cannot love.”  Sounds like some boyfriends I have known.

The Leopold has a lively rooftop café, with wraps and other casual fare and a fine view of Vienna. It also has a nifty museum shop.  I bought a locally made ring with a square pink Swarovski crystal set in a band made of rubber, very glitz/grunge.

There aren’t a lot of stores in the MuseumsQuarter, but one that stands out is Combinat; it sells cool clothes by local designers. It’s in the part of the MQ called Quartier21, which has workshops and studios and temporary exhibits. 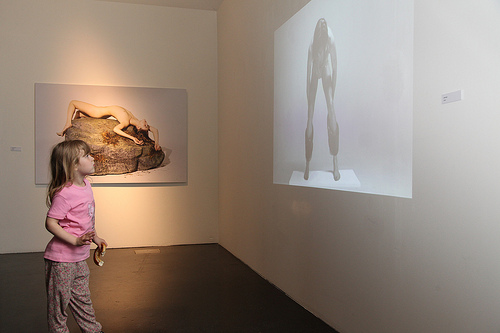 An Exhibit at Quartier21, photographed by Lorenz Seidler

To get the lowdown on what is happening, check out eSel Rezeption. It’s on Electric Avenue as soon as you enter the MQ. It describes itself as an art information office and “a micro museum shop for the dissemination of art in everyday life and on the forms of intelligent conversation.”

I want to return. First to the 2112 mega exhibits of Klimt in museums all over the city. Then to check out what’s being called the Year of Fashion at the MQ. And, of course, just to hang out.