You are here: Home / All Aboard! / Rent! in Vancouver with Fighting Chance Production 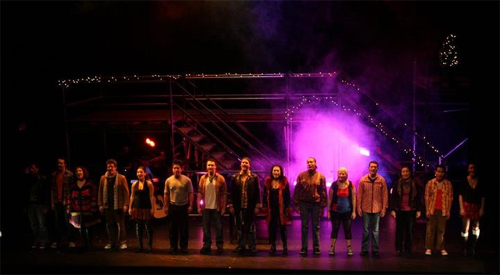 Last Thursday, I had the privilege of seeing Fighting Chance Production’s rendition of Rent performed on stage at the Waterfront Theatre. It was the first time I’d seen the musical on stage. My previous exposure was in the heat of my awkward teenage years (which are taking their sweet time leaving the nest), when my mother took me to see the film adaptation; we love going to the movies together and this was one of the many we’ve gone to see. I don’t remember why we chose this one, but I loved it. I bought the DVD when it came out, and I had the soundtrack. By the time I hit my second year of high school though, the shine wore off a bit and though I tend to retain a fondness for everything I liked when I was in middle school, I didn’t really think much about Rent apart from having some of the songs blaring in my mind every once in a while. 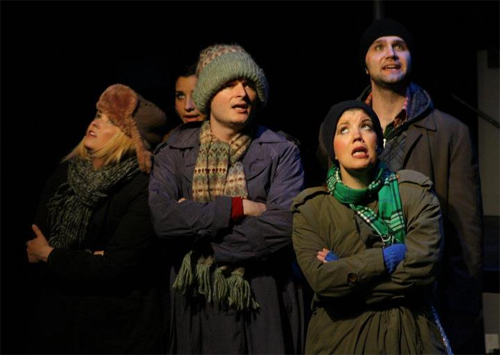 It was definitely a very different experience on stage! Ultimately, it was delightful, though it took me some time to stop visualizing the film and appreciate the stage production for what it was. I saw the show with Emme and when we were talking afterwardS she told me she didn’t like the film version of the show; I can’t say I think the same, since I did enjoy the film very much. The stage version is the source material for the film, but it was decently adapted and at least worked for me when I was younger. I saw a bit of it again to refresh my memory recently, and though it has its patchy bits, it mostly holds up well. 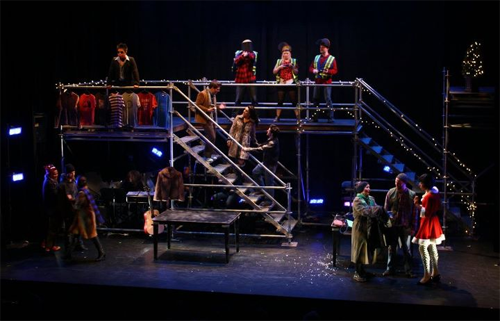 However, as it must have been for fans of the stage when the film came into being, I couldn’t really help but make comparisons. Mind you, the first thing that sparked comparison in my mind was the opening scene, and the stage version brought a lighthearted charm to the story’s opening scene that the film didn’t even attempt to capture. The film had the luxury of simply showing two of the central characters, Mark and Roger, living in their loft without having to give them a scene where they point out the amenities of the place, such as their illegal wood-burning stove, and describe the place in such a way that I believe they were trying to mockingly present it as one would a palace. Especially seeing as the set was rather minimalistic compared with the sets and location shooting options available to the film version, it helped bring the setting for much of the first act to life and, along with the little voice mail numbers that were either modified or did not make it into the film at all, brought a touch of sillyness to the show that I truly loved. The film (which, unlike the version of the stage incarnation I saw, actually opens with Seasons of Love and then segues into “Rent” right away) made use of Mark’s accumulating footage throughout the film and a spectacle out of the “Rent” number by having the performers burn up their eviction notices and let them fall gently from their windows; these were things I missed from the adaptation, though the flaming eviction notices possibly didn’t carry over because it could cause a major fire hazard. I would assume. 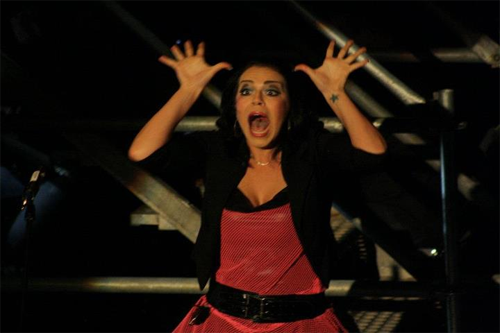 One thing I found worked better on stage than in the film was Maureen’s protest, a sort of Hey Diddle Diddle inspired allegory protesting her performance space being taken away to be transformed into a ‘cyber café’. This sequence was possibly the least beloved for me when I saw it on film, but on stage it somehow came off as… charming in its hokeyness. Part of it could have been Chelsea Tucker’s masterful rendering of the character; she nailed her almost comical primadonna attitude, in my opinion, and it was a joy to see her character on stage every time. But the stripped-down nature of the stage production and the different atmosphere made it a bit less unbearable than the larger-than-life treatment the performance gets in the film, complete with Maureen biking into the performance. 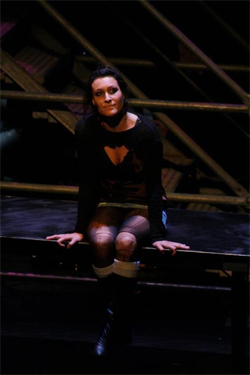 This brings me to part of the reason I was interested in seeing the show at all: I was curious to see how it would differ from the film and how it would be the same, what the adaptation changed and what it left out altogether. I would have been a little disappointed if everything was the same, really. At the heart of it, the story was the same and the messages, patchy on their own right or not depending on what came through strongest … I love the Rent’s core theme of treasuring your life and living with as much hope as possible even if your days are numbered, not so wild on the glorification of the ‘starving artist’ lifestyle. I almost cried at the end, as I did watching the film! (I rarely cry for real, so almost crying is as good as actually shedding tears as far as I’m concerned.) I can’t say which I enjoyed more, since they both had their ups and downs, but either way I had a good time at the show!

You can catch Fighting Chance Production’s version of Rent on stage at Granville Island’s Waterfront Theatre in Vancouver Tuesday to Sunday nights at 8 pm, now until August 18th, 2012 with matinees at 2 pm on Saturdays and Sundays. Get your tickets here. 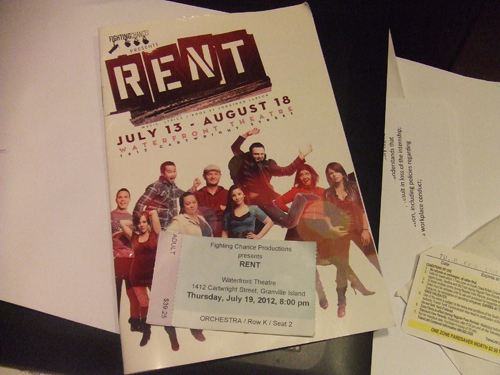 Souvenirs from a wonderful night.