You are here: Home / All Aboard! / A Solo Girl’s Guide to Hitchhiking to Ucluelet – Part 2 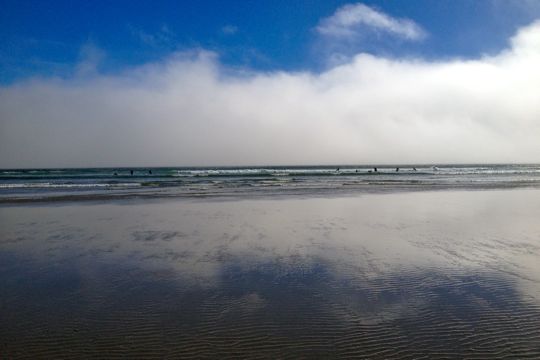 Waking up to a truly West Coast morning!

After being in Tofino for a few days, I needed to make my way to Ucluelet, a town about 30 minutes away. Although I already planned to hitchhike again, I still asked the front desk of my hostel in Tofino what was the best way to get to Ucluelet. They informed me that there was a bus but that it only left twice a day and that if I was comfortable with it, they would recommend hitchhiking as that’s what most people did. Secretly, I was thrilled to hear it and have the chance to hitchhike again.

They recommended hitching outside of Surf Sister Surf School, as it was at the end of the main road leading out of town. I walked out there, armed with a fresh cardboard “UCLUELET” sign. It was a good spot: there was a wide shoulder where I could stand and easily be spotted and there was enough room for a car to pull over. I held up my sign, put out a thumb, and almost immediately a car pulled over.

Two men in a station wagon offered to take me to the junction where the Pacific Rim Highway turned towards Port Alberni and the smaller Tofino Ucluelet Highway continued on to Ucluelet. Since I had only just started, I declined and decided to wait and see if I could find a ride all the way to Ucluelet. In truth though, I declined the ride because it didn’t feel right. The two were quite big and in the back of my mind, I couldn’t shake the feeling that if something were to happen, they would be able to overpower me in a second.

I continued standing by the side of the road. As cars passed me and people gave me disapproving looks, I started to feel discouraged again, just like in the vehicle deck of the ferry. After what seem like ages (in reality, it was probably ten minutes), a black sports car pulled over. A young guy sat at the wheel. He offered to take me all the way to Ucluelet, even though he was actually on his way home to Port Alberni. 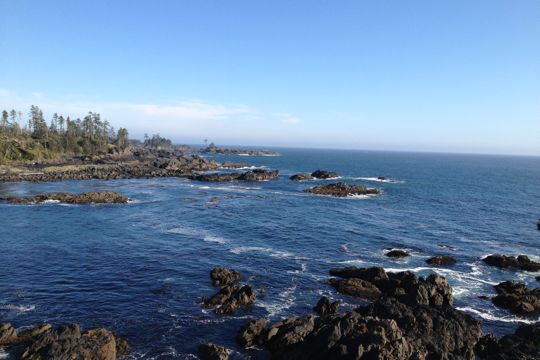 The view that awaited me in Ucluelet.

He was extremely chatty, telling me about his life in Port Alberni, his girlfriend, his friends, and his plans for school in the Fall. He had just dropped off a hitchhiker in Tofino even though he had only been heading to Port Alberni from Nanaimo, and was once again going out of his way to drop me off in Ucluelet. I soon discovered he and his girlfriend of four years had broken up that morning and as a result, he just wanted to drive around and avoid going home. I got the feeling he also just wanted to talk to someone. Sometimes, it’s just easier to talk to a stranger.

I arrived in Ucluelet feeling lucky and grateful for my experiences. The first time I had hitchhiked in Europe, I had been amazed by the kindness and generosity of strangers. Now, hitchhiking halfway across the world, I felt no different. Hitchhiking isn’t for the faint of heart, and it can be exhausting and frustrating at times, but it can really restore your faith in humanity. There are kind, generous people everywhere.

My tips for hitchhiking: