You are here: Home / All Aboard! / Hiking the Tofino Bomber Trail

Last summer, after returning from Tofino, I discovered I had missed something interesting. Though I had fulfilled all my plans of hitchhiking, surfing, hot springs, and whale watching, I had missed a significant hike: the Tofino Bomber Trail.

In 1945, during WWII, a RCAF Canso bomber plane crashed in the woods off the Pacific Rim Highway during a routine patrol of the coastline. While all twelve people onboard survived and made it out of the woods, the crash was deemed too expensive to clean up and the plane was left out in the woods. Now, almost seventy years later, the crash site is still out there and a trail exists for anyone who wants to see the plane. However, the trail is not an official one and is not maintained, meaning it’s not promoted by Pacific Rim National Park or written up in any official literature or guidebooks. I hadn’t heard about it because it was so off the beaten path that it was almost a secret.

Panorama of the crashed bomber.

However, while the trail is not well known, it’s not exactly the best-kept secret anymore thanks to the internet. Instructions on how to reach the crash site are easily found if you google “Tofino bomber trail” and photos of the plane are all over Google Images. Unfortunately, I only heard about the crashed bomber the day after I returned from Tofino last summer. I was crushed I hadn’t heard about it earlier as I would have loved to have seen it. Since then, I’ve been determined to return and see the plane for myself. Luckily, I recently had the opportunity to return to Tofino and this time, seeing the plane was at the top of my list.

So on our second day in Tofino, we went for it. We parked in the Radar Hill parking lot and walked along the edge of the highway, counting telephone poles. At the fifteenth telephone pole, there was a little drawing of an airplane and arrows pointing into the forest. We turned in and found a trail that was wide and clear. I had read online that the trail was extremely muddy, so I wasn’t sure if the trail we had was right, but we pressed on. Shortly before reaching an abandoned building, we encountered a few Australian guys returning from the plane. They advised us to take the left trail after coming out of the building because it was less muddy.

The abandoned building a few minutes later was covered in graffiti and was incredibly creepy looking. Inside, it looked like something out of a horror movie. As my friend put it, “This is where you get chopped up.” 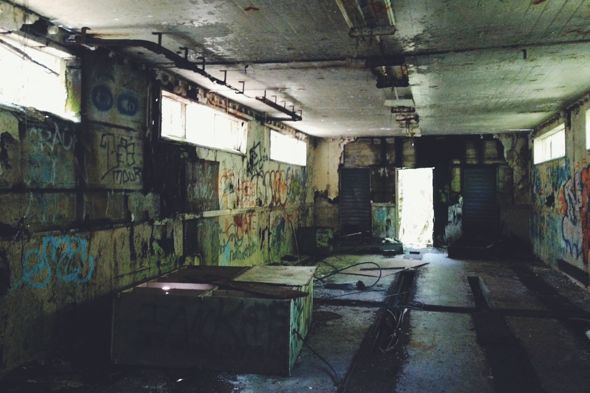 Inside the creepy, creepy building.

The graffiti instructed us to exit the building on the left. Once outside, we saw the two trails the Aussies had told us about. Following their instructions, we took the trail to the left. The trail was narrow and slightly overgrown. We constantly had to duck under branches and push through the undergrowth; it almost felt like bushwhacking. Thankfully, it was a lot less muddy than I had expected. It hadn’t rained for several days prior, so a fair amount of the mud had dried up.

We had no idea what to expect or even how long the hike would be. We only knew we were on the right track because of the trail markers guiding us. A few times we thought we spotted the plane, but it always turned out to be a log or a branch in the distance. Eventually, the two trails met up and opened up into a bog that we had to go around. I was worried about losing the trail on the other side, but luckily my hiking partner spotted the trail markers in the distance. It wasn’t long after the bog that we finally spotted the tail of the bomber plane. It was up high on a hill and seemed to emerge out of the forest like something out of a movie. In fact, approaching the plane reminded me strongly of the scene from Lost, when Locke and Boone find a crashed plane on their supposedly deserted island. 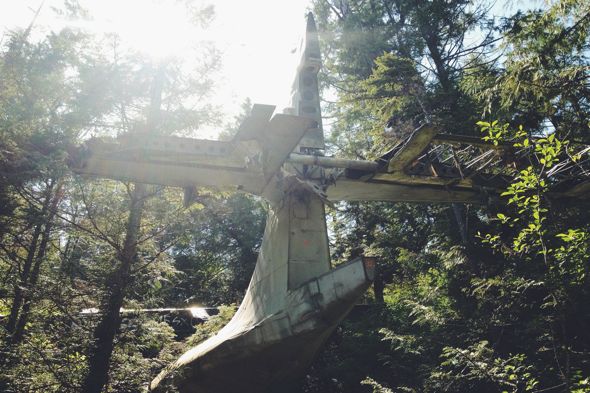 First sighting of the plane.

We climbed up the hill, avoiding more mud and puddles. It was surreal to finally see the plane. After hearing accounts from friends and reading about it online, the plane had almost seemed mythical. Several times during the hike, I wondered if we were on a wild goose chase. Now, staring at it, it was hard to believe that the plane had been sitting out there for almost seventy years.

We climbed up on top of the plane to admire the view and look down on the tail. The plane was covered in graffiti and filled with an assortment of empty bottles. After investigating around the plane, taking photos, and checking for any souvenirs (nothing was left but a few rusty spark plugs), we headed back. On our way back, we accidentally ended up on the other trail, the ones the Australians had told us to avoid. Sure enough, it was extremely muddy and definitely worse than the first trail we had taken. Regardless, we made it back and came out a little muddier and sweatier, but satisfied with the day and the hike. 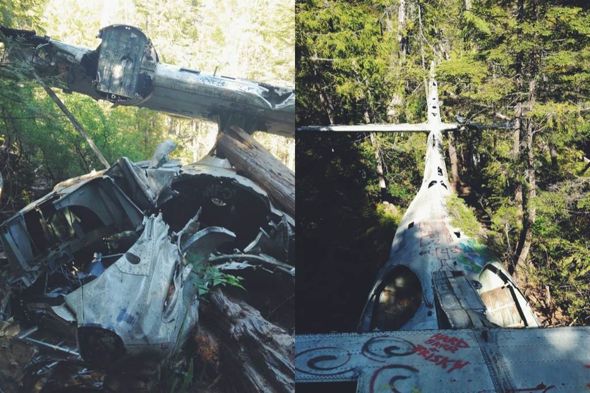 View of the nose of the plane & looking down at the tail from on top.

DIRECTIONS TO THE TOFINO BOMBER TRAIL

TIPS FOR THE TOFINO BOMBER TRAIL