You are here: Home / Around the World / Africa / Live a Little Reckless

In life it’s important to think about consequences and plan for the future. But it’s also important to damn the consequences and live for the now. Make mistakes, get on the wrong train, go somewhere your mom would rather you didn’t and experience life without boundaries. And when I suggest living a little reckless I truly do mean little, don’t put yourself in unnecessary danger. Nobody wants to identify your body, and friends are not free babysitters.

The following are three mini stories where I was a little reckless and how it was totally worth it. 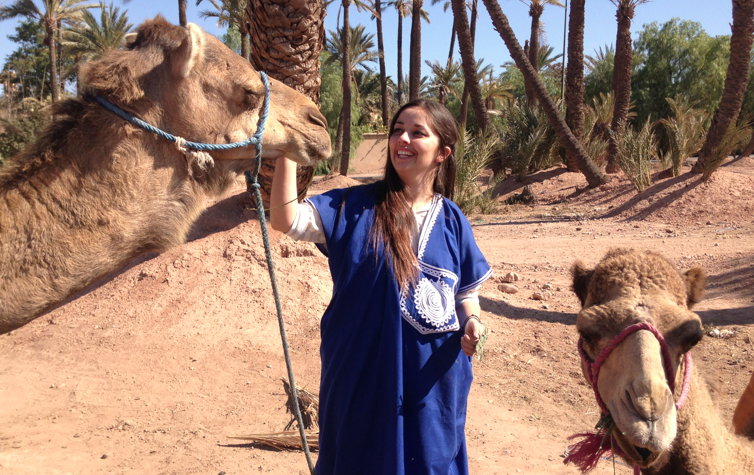 When I say ‘mistake’, what I really mean is a series of mistakes that lasted 17 hours and cost around 250 euros… each. The whole mess started in Rome when my best friend Madison and I couldn’t find our bus to Sicily. It was Satan’s ass crack of dawn, and after asking several people we found out we were at the wrong station. We ran and caught a train to the right station five minutes too late and the next bus didn’t leave till the next morning. After heavy deliberation (we said F it), we booked a flight. We then sprinted to catch the shuttle to the airport. Now there are only two airports in Rome and you guessed it, we went to the wrong one. 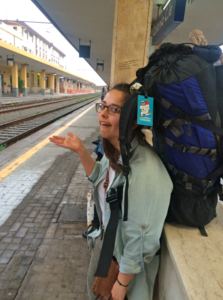 Me having a great time.

Finally arriving in the southern part of Sicily, we were completely unsurprised to discover the last shuttle going north had already left. Persevering through, we took a bus into the city where we got on a train that took us half way there. It was dark at this point and we waited in an empty station save a homeless woman. I only had a few euros left and was reluctant to part with them, because I was hungry and truly almost out of money. But seeing her return to her home of cardboard boxes was a slap in the face. I ventured outside and gave her the rest of my change and if Karma’s a bitch she’s misunderstood. The employee at the ticket desk realized our train would stop one town short of our destination (ONE FREAKING TOWN SHORT), and called our Bed and Breakfast who arranged to send a ride for us. 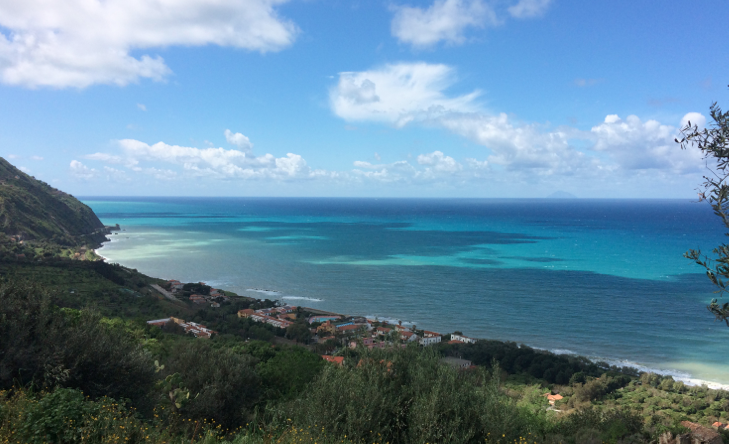 Fast forward to us at an abandoned station, one town away from our destination. Enter Fabio. Fabio was in his mid thirties with slicked back black hair and a bandaid on the side of his forehead. He spoke very little English, and led us to his car where his friend was waiting. With a trunk full of murdery looking tools, I was reluctant to get in. Madison, however, couldn’t have cared less. I telepathically asked her (the way best friends do) if she was sure we should do this, to which she shrugged. See Madison is the type of person you don’t want to attack, because she’s literally ready to kill you. I, on the other hand, was mentally preparing to leap out the car window. Once inside the potential kidnapper’s car, I turned to telepathically tell Mads that she was my best friend and I loved her, and I was ready to allow her to sacrifice herself, so I could get away. To my dismay she was napping against the window. Left to my own devices, I was forced to enjoy the midnight view of the star sparkling ocean. The road wound along the hilly coastline of Sicily and was completely breathtaking. Who even cared if we died with a view like that? As it turned out, Fabio was a super nice guy with a weird bandaid on his forehead, and I was completely overreacting.

While on a trip to Marrakech, Morocco it was immediately apparent to me how different Morocco is from Western culture and the social norms I had grown up with. An example of this is in the main square. There’s a row of carts that all serve freshly squeezed juice, where the vendors will greet you with a cacophony of screams, whistles, and any other loud noise they think might get your attention. It’s extremely thrilling, in a sensory overload kind of way. Another big part of the culture is cat calling. Men will stare you down and shout anything they feel like, we were even cat called by children. 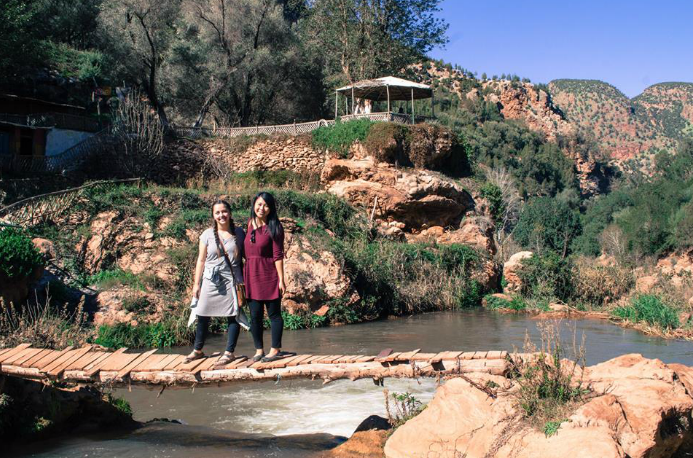 Christina and myself. Photo by Christina Guan.

So my friend Christina and I decided to take a day trip to Essouira. Since it was going to be a hot day, I decided to wear a loose dress that I thought would be suitable, as it covered my arms and went to my knees. Pretty conservative to a Western mindset. But when we got there and started walking around, it was like I showed up naked. The men stared at my calves like they wanted to eat them. And not in a casual cursory glance kind of way, in a serial killer razor focus kind of way. On top of that, it was very windy so my loose dress was having a time fluttering up, trying to expose my butt to the world. I wasn’t ready for that sort of attention, so I ended up putting on a sweater and pulling my dress down so it covered most of my legs. Infinitely more comfortable, Christina and I had a blast wandering around, shopping and bartering with locals. 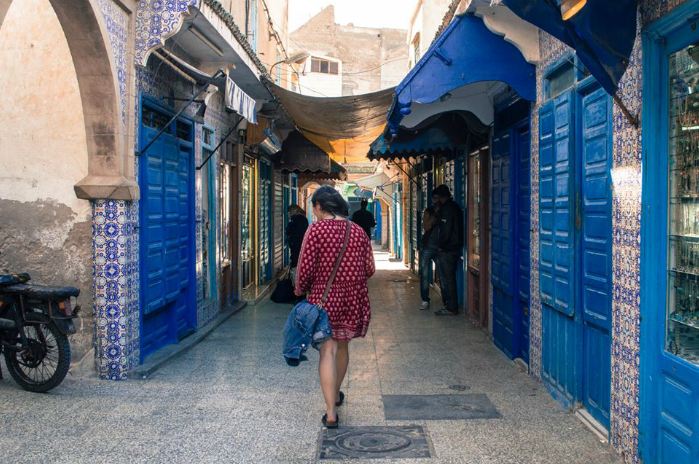 We somehow ended up a little ways away from the main strip, and took a side street in attempts to cut back in. It was still quite pretty, but more derelict than the tourist part of town. As we walked down the alley, men leered out windows and doorsteps in their usual manner. But then they started appearing in larger numbers, and seemingly poured out of the cracks in the walls like ants. And it’s a fine line every woman knows: trying to look casual but walking quickly but not too quickly as to become prey. It was at this point that Christina leaned towards me and said “It’s like the meat market, only we’re the meat”. Forgetting our threatening circumstances I howled with laughter. I am not a piece of meat, and I was tired of being intimidated. Feeling unsafe and preyed upon is never a good feeling, but I will say the relief and appreciation afterwords makes the world taste a whole lot sweeter. 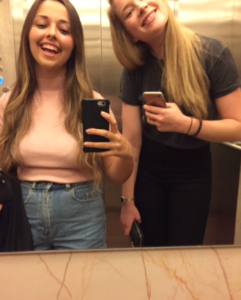 Idiot 1 and Idiot 2 in Vietnam.

During Madison and my backpacking adventure in Hanoi, Vietnam, we were trying to cancel a flight to Bali where it was forecasted to storm all week. Now when you’re travelling abroad and you need someone to cancel your flight, best not to text your sister “call me, it’s an emergency” and then message your mom and friends to tell her to call you. This will freak her out, she will think you’re in prison, and she most definitely will be furious with you. That being said, I would also advise you to get a dependable sister, who can get shit done from across the world. But not mine, she’s taken.

So once my sister Sammy cancelled our flight, we booked a new trip to Myanmar to meet a friend. Aussie Alex (as we like to call him) travels all over the world and encouraged us to join him and his sister in Bagan. We honestly couldn’t have named one city in Myanmar (previously known as Burma) or even found it on a map. While at the airport, after informing my parents of our plans, they quickly sent me countless travel warnings not to go to Myanmar. Military and armed groups, ethnic conflict, banditry and unmarked landmines along the borders, and civil unrest in some States, being the most severe of them. The rain in Bali was sounding cozier by the second. But we did some research and decided the area we were going to wasn’t highly warned against, and chose to give it a fair go. This might have been one of the best decisions we ever made. 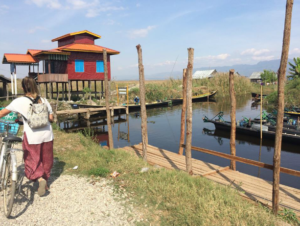 It was a complete breath of fresh air from the touristy developed areas of Vietnam and Thailand. Bagan is an almost empty archeological zone with thousands of pagodas and temples you can explore by yourself. Renting a scooter for the day was seven dollars, and you could start by watching hot air balloons sprinkle across the horizon at sunrise. We also explored Inle Lake, which had ridiculously fresh and delicious food for stupidly cheap prices. I couldn’t recommend traveling there more.

So take little risks and live life without fear. I mean worse comes to worse, as Peter Pan once said: “Death, would be an awfully great adventure.” But seriously, try not to die, at least not till you’ve lived.