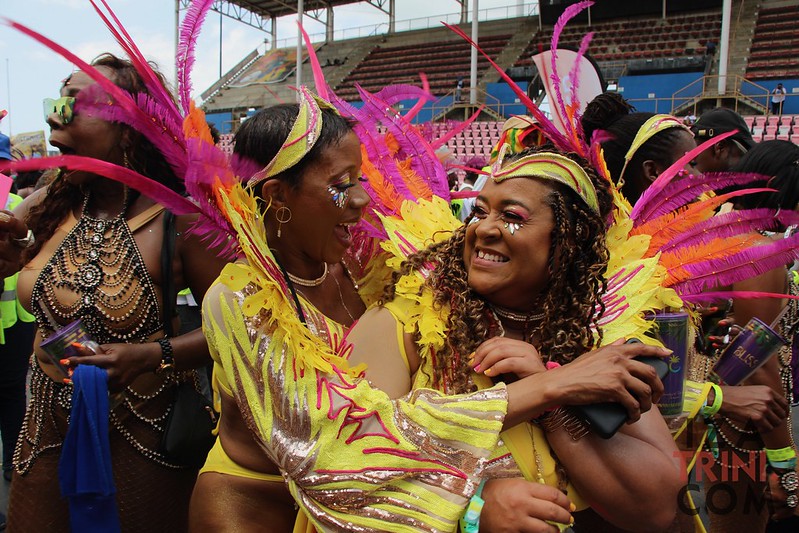 Imagine the Academy Awards, New Year’s Eve and World Cup Soccer, all rolled into the most important day of the year. It’s Carnival, and the Caribbean Island of Trinidad claims to have invented it in the new world. This is serious business, with contests, royalty (kings and queens of music), costumes, and newspaper articles offering everything from editorials (has Carnival in Trinidad become too Vegas or Brazilian?) to makeup tips and stretching exercises for those who plan to dance all night.

Tens of thousands of Trinidadians living abroad pour into their country every year for carnival. Many buy their costumes in advance, join a masquerade band, and live it up. But what’s it like for a first-timer? For me, pre-carnival started out as something I couldn’t wait to escape. You see, I hate loud music. I am here with other travel writers to cover the event.

At 3 am I am awakened by the mother of all wake up alarms: the throb of music so loud it shakes the panes of glass in my hotel room window. The thrum and blare of Soca (soul and calypso) music comes from a procession winding its way past the Trinidad Hilton, Carnival central because of its proximity to the main outdoor stadium.  But this is early Monday morning; Carnival is not until Tuesday (the day before Ash Wednesday).  The pre-dawn revellers are celebrating the weird Walpurgisnachtian ritual called J’ouvert, which in Trinidad opens the day before Carnival.

Having to be awake and ready to go at 3:45 am in a Hilton lobby is even more disorienting when the lobby is full, the bar is buzzing, night is day – and you’re surrounded by accountants and bespectacled computer nerds dressed as gladiators and Vegas showgirls.  They have come from London and Toronto, Milwaukee and Detroit.

Once on the street, in the dim light, I notice that this isn’t the Carnival of glitter and spangles; rather, J’ouvert Monday is about the shadow side of the celebration. People are dressed in rags; some are smeared with blue paint, others with mud.  The grunge look is supposed to have originated in the slaves = mockery of their masters, but today the effect is more Apocalypse Now meets the Night of the Living Dead.  I find this appealingly in synch with my mood.   I hate loud music. Loud – the kind you feel pounding your head, the kind that comes out of assault amplifiers. I find it noise torture, the very opposite of music, which is supposed to please, not pummel you. I avoid loud music wherever it lurks. But for the past few days, I have been surrounded by it. And Carnival has not even begun.

Trinidadians insist that Carnival in the New World was born in their country. Carnival seizes the nation, engulfs it; for days and days before Carnival, people – not only the young – go to all night parties, dance and drink rum.  Tourists who plan ahead can do so, too, and they don’t have to feel like outsiders.  For Carnival, while a visual treat, is not merely a spectator sport.  You may know no-one but you can talk to almost anyone: after all, you are on the same lunatic trip. You’re all part of the performance.

One night I lie in bed, the music mercifully in the distance, fearing it will come nearer. Instead of counting sheep, I go over my meals.  There were the breakfasts starting with a plate of fresh fruit – papaya, watermelon, grapefruit. Then Buljol, shredded codfish with onions and tomatoes, bell pepper and olive oil.  A memorable lunch of pastelles, polenta corn patties filled with minced meat, olives and capers, all wrapped in banana leaves. There was pureed eggplant salad herbed with garlic and Trinidad’s unique variety of coriander. And let’s not forget the national dish, callaloo soup, made from okra, dasheen leaves and coconut milk.   Also delicious is the fast food on the street: corn soup and wraps called doubles made of soft fried dough filled with curried channa (chick peas). Dinner is likely to be grilled fish, steamed greens and pumpkin puree.   For my money, Trinidad has the best food in the Caribbean. It’s based on fresh ingredients and a liberal use of spices. Thanks partly to its large East Indian and Chinese population (recruited when the African slaves were freed and farmers were needed) and partly to a land blessed with fruit, vegetables and fish, Trinidad’s food is healthy and tasty. It’s easy to eat fish and load up on vegetables and fruit.  But food isn’t everything, I mused, as I thought about the previous few days of weirdness.

… is the contest that ends in the crowning of the King and Queen. There’s a kind of absurd high seriousness here, an Alice and Wonderlandness in the outdoor stadium where the contenders parade their costumes.  Costumes? These are really floats on wheels, manoeuvred by one person who must be strong enough to pull the thing around the stage.  Some are 20 feet high and sprout sparklers. The theme can be anything.  The men’s costumes tend towards alien predators, sinister giant space insects. But there are enough pink flamingos and graceful flora bending in the breeze, not to mention a giant spider with monster legs to suggest that nature is the main inspiration.

No wonder, Trinidad and the neighbouring island of Tobago are uniquely blessed with an astounding variety of flora and fauna, thanks to their origins as part of the South American mainland. When it comes to variety in nature, no Caribbean country equals the two-island state. Even Trinidad, with its industrialised capital, Port of Spain, a former oil boom town, is only a short drive to lush, jungly rain forests, spectacular beaches, and mountains where people still hunt game. Of course, if you really want an unspoiled island paradise, take a 20 minute flight to Tobago, the island of Robinson Crusoe. But for Carnival, Trinidad is the place and Port of Spain the epicenter.

… is the day of the all-important pan contest. Pans are steel drums made from oil containers. The only acoustic instrument invented in the last century, they are taken very seriously – pans have appeared in everything from jazz bands to symphonies.  At the Hilton there is a lilting steel band by the pool. I find it much more appealing than the pan finals, which are so loud that the music becomes aural mush. After two hours, I leave early and go back to my room,  exhausted and disgruntled.  I’m starting to think the unthinkable: maybe I have flunked carnival.

I see a glittering variety show called Dimanche Gras, a grand spectacle of highly talented and well rehearsed dance troupes, Soca and calypso singers. By this time, I am judging everything according to how loud it is.

Relief: Calypso, the signature music of Trinidad, cannot be played at top decibels for one important reason: the words are all. With merciless, stinging wit, Calypso songs, performed by one singer and a few backup people, criticise government figures and spear hypocrisy, all in mock-simple tones sung by a hypothetical average guy.

After getting up before dawn and dancing all day, some of my wacky writer colleagues decide to go into town that night to follow the flatbed music trucks. It’s like gettingyour feet wet before you swim a marathon.  According to tradition, people wear only a suggestion of the costumes they will don the next day.  Women sport leotards, tights and running shoes, making the procession look like a giant aerobics class. Here is where you are supposed to start dropping your inhibitions like candy wrappers. You “chip”(dance/trot) with the crowd behind the sound trucks. If you stay far behind, the noise isn’t so loud. And like all over Trinidad, people are friendly without being obsequious. Are we having fun yet? Sort of.

The big day. People are up early, some to join their bands, others to secure their places at the reviewing stands scattered throughout the city and at the outdoor stadium.

The stadium is where the bands (as in masquerade not music), unleash their last burst of energy on stage after dancing through the streets in the hot sun all day. This is where, under the flashing and whirring of cameras, each band is a mini-Broadway show, and each person a star.

With other voyeurs of the foreign press, I find myself dancing at the back of a masquerade band as its music truck moves slowly down the street. We haven’t bought costumes, but we have picked up some pieces discarded by the revelling dancers after their moment of glory on stage.  One of us wears a Norse headdress with dreadlocks, another a warrior princess plumed headdress. Thus attired, we wander the streets, “chipping” behind fully costumed masqueraders.  Carnival is the great leveller. Ministers and their wives ‘play mas’ alongside janitors. Just as important is the physical democracy: you don’t have to be young and svelte.  Spreading middle-aged flesh has as much right to be displayed as 20 year-old tautly perfect bodies.

At the slurpee stand we meet a young man who says he is the “PR Representative” for a band.  When he sees our dangling laminated press passes, he tells us he can get us into the band, into air conditioned trailers with food and drink. Even more important, he says he can get us costumes, an impossible feat given the fact that you have to order them months in advance. We (there are five of us) fantasise waving to our colleagues from the stage in full Carnival dress. You get to trot across the stage only if you are in costume and part of a band.

But first we have to find the band. So we follow the ‘PR Representative.’ We follow him through streets of revellers, winding our way through vendors selling roti, slurpees, rum, beer, corn. Under the hot sun, surrounded by plumes and spangles, dancing along with others, we can’t help laughing. It’s fun and safe. And everywhere there are subtle limits. People are bumping and grinding, but no one is doing it in the road; in Brazil, by contrast, public sex is such a prominent feature of Carnival that the authorities now hand out condoms.

In our bacchanalian groove, we look for drink – there are beer and rum stands everywhere, as well as tempting fresh-squeezed tropical fruit juices.  Nothing costs more than a dollar or two. But after buying a few rums, one of our esteemed colleagues finds his pockets empty. He borrows one Trinidad and Tobago dollar (less than a quarter) after another, and then blurts out to a woman in our merry band, “Give me all your money.” And she does, all four dollars of it.

We never find the band. By this time, we don’t care. The heat and the rum and the music and the costumes –  there’s an exhilaration that makes this a day meant for celebration. Did I learn to like loud music? No. But I’d jump up at the chance to go back again.