You are here: Home / All Aboard! / Ross Neilsen Singing the Solo Blues at the 2012 IBC in Memphis, Tennessee 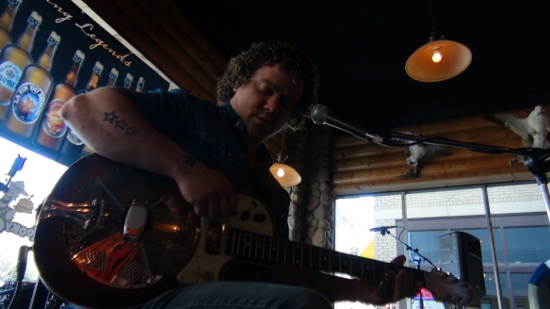 Seems only fitting that Ross should be featured on Tunes from the Road again, as he inspired the diversion of what was suppose to be a road trip to Savannah to Memphis.  You see neither Ross or I seem to be all that up on our US geography, other than the fact that both Savannah and Memphis are in the Southern US. Ross was playing in Memphis, Tennessee, and mentioned that if we happened through Memphis on our trip to Savannah, we should come hear him play.  I mentioned this to my road tripping buddy, before I bothered look at a map to discover they aren’t exactly close or on-route, rather similar to the distance from Calgary to Vancouver (similarly, both out West – come to think of it, maybe that’s why so many travelers strife to see both Banff and Vancouver on the same trip). By the time I’d discovered this, it was too late, my road tripping buddy had figured out that Ross was playing at the International Blues Competition and being a music lover clearly this was a sign from the heavens that we should be high tailing it down to Memphis instead.

Once I got over any concerns of being perceived as a groupie, I have to admit I was pretty glad for the happenstance, as Memphis is a fabulous town, I met and listening to some talented musicians, and I got to experience Ross performing solo.  I like Ross with the band, but I LOVE Ross solo.  The man has talent and you see so much more of his depth and his sole when he’s on his own.

Yep, the man has cool boots.

See for yourself, here’s an incredible set DittyTV filmed of him in Memphis.   Be sure to watch right to the end, as the last song is my favourite.  When I saw him perform this live, it really tugged at my heart strings, and after hearing his introduction to this song here, now I know why.

Not nearly as beautifully filmed or as good sound quality, but nonetheless a video of Ross playing at the 2012 IBC Great Canadian Polar Bear Blues Showcase that I filmed.  I’m rather fond of the boot shot.

Thanks again to the Ottawa and Montreal Blues Societies and the Kooky Canuck for hosting an event to showcase all the great Canadian musicians at the IBC!