You are here: Home / All Aboard! / Crossing the Otay Mesa Border to Fly Out of the Tijuana Airport

We recently made plans to visit friends in Mexico, which had us flying out of Tijuana.  “Why on earth would we do that?!'” you ask? Well, flying out of the Los Angeles’ LAX airport was not a direct flight and it was going to be ridiculously expensive. We actually called our friends to cancel and they are the ones who convinced us that flying out of the Tijuana airport was the best idea. Turns out they were right; the flights were direct and half the price.  The adventure wasn’t just in the flying though.  We had to drive to the border of San Diego and Mexico, park our car on the USA side and then walk across the Otay Mesa border, and take a taxi to the airport.  “Are you nuts?!” you ask.  Well, yes, we certainly thought we were, but we wanted to see our friends and we knew that by doing the right research it would be a safe, well organized, adventurous undertaking.

I found out that the Otay Mesa border crossing is the best one to take if you are going into to Tijuana to fly, rather than to shop or party, because the airport is only 2 miles away.  I also found the best place to leave our car on the American side.  It’s called Delta Truck Parking. Their website is so informative that it cleared up any concerns I was having. They were able to describe exactly what our experience would be like from the minute we were to drive onto their lot, all the way to the airport. I’d like to report, that everything went exactly as they said it would! 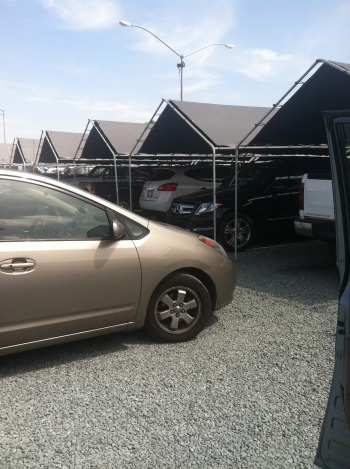 Our car at the Delta lot. You need to leave your keys with them, for obvious reasons.

We made our parking reservations ahead of time through their site and pre-payed with Paypal.  The whole thing cost us about $40 to leave our car with Delta for 6 days! When we arrived they were expecting us and a shuttle was ready to drive us to the border crossing within 5 minutes.  It was under a 5 minute drive, and before leaving they made sure we knew which taxis were the right ones to take us to the airport and that the fare would be $12 (so we wouldn’t get taken by a driver thinking we had no idea and charging us more!) Delta also made sure we had their number to call them to pick us back up when we returned from Mexico. 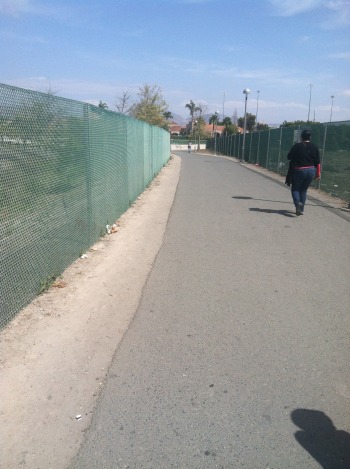 I don’t know why, but I wasn’t expecting such a nice paved walkway to cross the Mexican border. The automobile crossing was just on the left of the fence.

Sorry, I didn’t take any photos closer to the border for fear of getting in trouble! When going through customs entering Tijuana, there was no line up at all and just one officer there.  We had to send our luggage through a security scanner.  The officer asked us where we were going, nodded his head and that was it!  Super easy! Walking out of customs brings you right to the street where the taxis were waiting. We hopped in and made it to the airport pretty quickly, and only had to pay $12 just as Delta said.  They did take American dollars, but everywhere else on the trip only accepted Pesos. Now, I do admit, there was a moment during the taxi ride where I panicked thinking “What if this driver isn’t taking us to the airport? What if he’s taking us somewhere awful where they’re going to kidnap us … sell us … or worse?” After all, we didn’t know the way to the airport ~ so in any city actually, that requires you to be a totally trusting tourist.  This was especially difficult for me though, because of the reputation Tijuana has. I recommend reading these safety tips for travel in Mexico before you go. 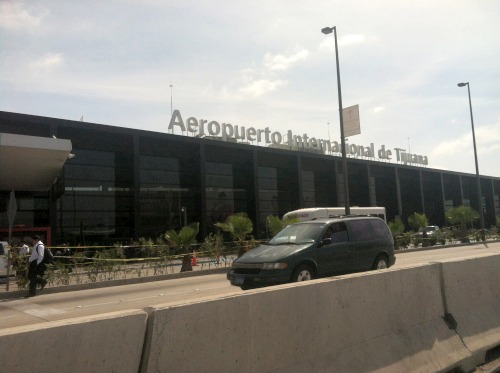 Pretty nice looking airport! I recently read that they are building a pedestrian bridge to connect to the San Diego Airport.

Once inside the airport everything went really smoothly.  I have to say that another misconception we had was that the Tijuana airport would be a run-down, crazy or questionable place to be.  Boy were we wrong! This turned out to be the most organized, efficient flying experience I have ever had! There were agents everywhere to help you and we were ushered through the lines with ease. Mind you, no one spoke English, but we had a good idea what they were trying to say based on body language, and having traveled before.  Perhaps the biggest mistake we made was not bringing our Priority Pass airport lounge card with us.  We thought there was no way somewhere like the Tijuana airport would have a lounge. Wrong Again! They instead have one of the swankiest ones we’ve seen.  After fuming with regret and laughing at our horrible misconceptions of this place, we decided to give it a try anyway.  We went up to the lounge; they called in someone who spoke English, and after pleading our case they let us look up our card number on our phone and used that to let us in. 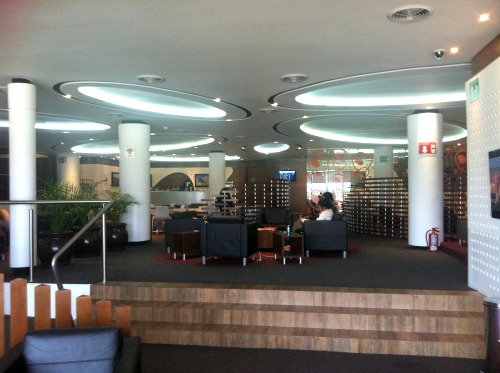 The VIP Lounge. Perfect environment to enjoy the first pina coladas of the trip!

I have previously written about the joys of obtaining a Priority Pass card and its value became even more apparent on this trip. When it was time to board our plane there were a lot of instructions being given, and even though we strained our ears really hard, it still didn’t make us suddenly understand Spanish.  This must have been pretty apparent as a kind stranger came over to translate for us. They split the passengers into 3 groups, and I really have no idea how they did it, but the entire plane was boarded in about 10 minutes.  Brilliant!  We were once again lost in translation as the captain came on the announcements and clearly said something really hilarious as everyone on board was howling.  Doesn’t matter what he said, all that happiness put us at ease and we had a wonderful flight.

In closing I’d just like to say that we were equally impressed upon landing in Culiacan, a mere 2 hours later, where our friends picked us up.  Before leaving the airport, an agent checked our luggage tickets stubs and matched them to our luggage to make sure we were leaving with the right ones.  Bravo!

Know Before You Go